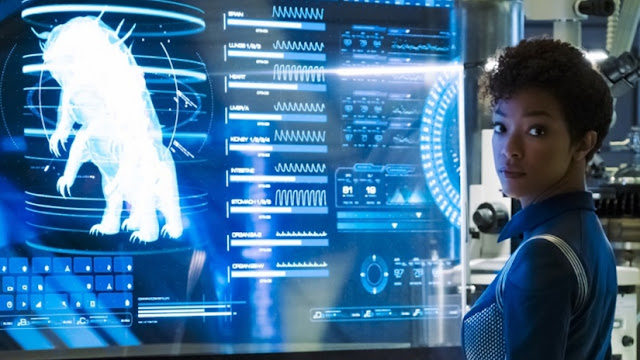 Following on from three fantastic episodes, this is probably the weakest episode so far. There were a few issues with a weak plot and the scenes between Voq and L'Rell, two of the dullest Klingons ever.

Sadly, every scene between the two Klingons made me want to fast-forward through them. I didn't in the misguided hope that something interesting might have happened. What isn't helping is that every scene with the Klingon's in is spoken in Klingon. While made-up languages are interesting in theory, practice is something else entirely and the redesign is something I still have an issue with. Voq comes across looking like someone trying to solve a tricky mathematical problem and the pair suffer because someone has obviously forgotten to give them personalities.

The whole topic of the Klingon/Starfleet war was interesting in the beginning. Now I just hope they wrap things up quickly. The action on the Discovery is much more interesting, it is brilliant to see the conflict for the soul of Starfleet going on between solider, Captain Lorca and the explorer, Michael Burnham.

Burnham continues to display all the virtues of a true Starfleet officer. Pleasingly, unlike Lorca and Commanader Cylon, she refuses to see the creature from the Glenn as a monster. Obviously to her, it is much more than a killing machine, something that can be dissected and turned into a weapon. It is a brand new lifeform and they should be trying to learn how to communicate and ultimately, understand it. This might not be the way that Captain Lorca would get things done but it is the Starfleet way. The problem is that in trying to do things in the Starfleet way, Burnham does give Lorca what he wants, through her care and compassion, she effectively turns the creature into a weapon Lorca can use against the Klingons.

Following on from the previous episode, I was interested to see why they won't use the microbes as a way to travel in the other ships in the show. My musing was answered here, without the navigator - the creature from the Glenn - their new propulsion system is pretty much useless. With only one creature, only the Discovery has this ability. And as drama must, something is obviously going to happen to it which sees the whole thing thrown onto the scrap heap where it can join the Excelsior's transwarp drive and cloaking device that allowed you to phase through stuff. Still, I can't help thinking that Discovery's strange new drive would have come in really handy during the Dominion War...