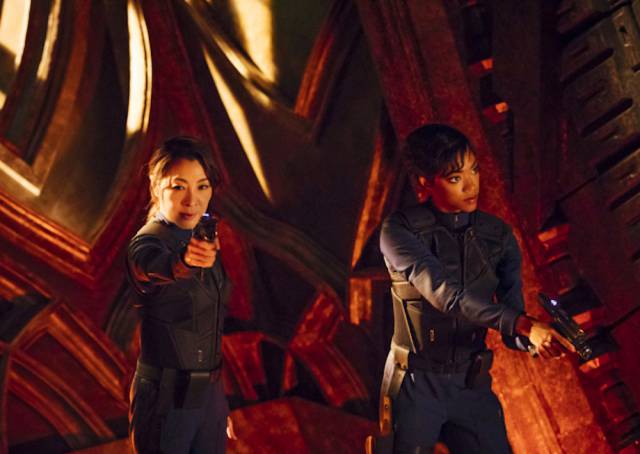 When Michael Burnham is convinced she is right in attacking her captain, she finds herself being hauled off to the brig. But then the Klingons attack and it puts in peril, everything that Burnham cares about.

One of the biggest hallmarks when it comes to writing good drama is that you have to keep your characters in enough layers of jeopardy. Everything has to build and build until the character in question has to do something that reveals the upmost strengh of their character. It is the dreadful algebra of necessity as Pratchett called it. What do you have to do in a situation that is so terrible, the answer is having to choose is also something awful. And what do you do when you realise this afterwards? One of the many good things about this episode is how well is applies this rule. Burnham and Georgiou are both combating the algebra of necessity in this second episode of the new season. It all starts with Burnham waking up in a nearly obliterated brig, behind a forcefield which holds the last of her oxygen.

Burnham really works as the Spock for a whole new generation of fans. Completely human instead of only half-human but both raised by Vulcans, Burnham internalises the feelings of her parent's deaths at the hands of the Klingon's which leaves her with the air of a Vulcan. When she is confronted with a Klingon in the first episode, did she know the weapon would kill him or was it an accident. I'm not sure that is something that even she knows.

This episode also sketches out some of the past for Georgiou and Burnham and we learn how Georgiou has tried to iron out a path to the captains chair for her first officer and friend. When Georgiou brings up her feelings following Burnham's icy escape from the brig, she can't tell if her actions were rooted in logic or overwhelming emotions. It is a needed breakdown from her superior attitude in the first episode. Does this mean that Sarek trying to get Burnham involved and trying to help Georgiou despite her internal struggles mean there is a lot more to this character than we see? Well, I'm not sure, but the connection between the pair was really effective.

Georgiou isn't forced to examine her feelings in the same depth as Burnham. But we see her wrestle with the notions of right and wrong when she confines her friend to the brig. The fact that is her ship that is attacked and that Burnham was right about the Klingons, just serves to make her even more frustrated because she is desperately trying to uphold her own morals and spread the Federation. This does mean that the ends don't justify the means as Georgiou and Burnham beam over to the Klingon ship and try to take their leader T'Kuvma alive. It is a pretty fantastic scene but what else should we expect from someone like Michelle Yeoh.

In the previous episode, I wasn't thrilled by the Klingons, but with this episode, they were brought forward a lot more. In the last episode they were on par with the worst of the original series. They were a cheesy, shiny monster who often exaggerated racial stereotypes. They hated phrases of we come in peace and the subtitles were annoying in the extreme. But this episode gave them a little more depth, although the maninical relgious-ish leader was almost a Star Trek stereotype in himself. I loved the bit where their ship sliced through the middle of the Admirals and I really loved the death of T'Kuvma. His dying line, "Whom do we seek? Kahless. How do we find him? Together. Give us the light to see. Forever. Will he hide from us? Never." This lone shows us how far away these creatures are from original warrior culture that was just out to capture, conquer and subjugate.

But Georgiou's death was unexpected and frustating. I loved the dynamic between her and Burnham. And I loved the fact that it was two badass women who jumped into the breach and tried to bring back one giant Klingon. Her death is clearly going to impact Burnham, who, after a cool scene with the crew escaping their crashing starship, finds herself on trial.

Burnham pleads guilty to everything, and now sees herself as the enemy. She finds herself imprisonned for life. I can't wait to see where the show goes from here...