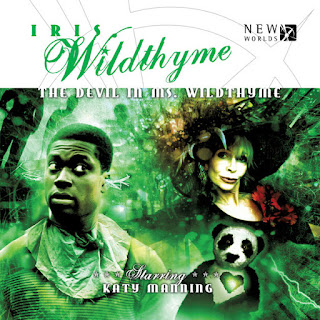 It is a rare event that any story with Iris Wildthyme should be written by someone else other than Paul Margs. But that is exactly what happened with The Devil in Ms. Wildthyme.

Penned by Stephen Cole, Iris was in safe hands as Cole had written for Katy Manning's Iris in the Bernice Summerfield story, The Plague Herds of Excelis and the Sixth Doctor audio adventure - The Wormery.

But despite the change in author, The Devil in Ms. Wildthyme is just as wacky and madcap as the previous one. It is a delight to listen to as hundreds of self-aware lines are spouted, comments about plot constructions and bizarre events, such as Tom, played by Ortis Deley, pulling straw from his ears as he slowly turns into a scarecrow.

Again, this play belongs to David Benson as Panda who discovers he has a heart and throws himself and his love on Iris, much to her disgust.

Frequent references are made in this adventure, as there were in the previous one, to Iris being a trans-dimensional adventuress, rather than just another wander in the one universe. This was probably because Big Finish were trying to keep Iris separate from the Doctor Who universe that spawned her.

It is was also probably prepared as a get-out-of-jail-free card as she is obvious a Time Lady from Gallifrey but at the time - 2005 - Christopher Eccleston was the last of the Time Lords. But then again, Iris never was considered a normal Time Lord!

At the end of the day though, none of that matters, this is another excellent outing for Iris, Tom and Panda. So whether you consider this a part of the wider Doctor Who continuity, as I do, or if you consider it a separate entity, just make yourself a gin and tonic, sit back, relax and enjoy...