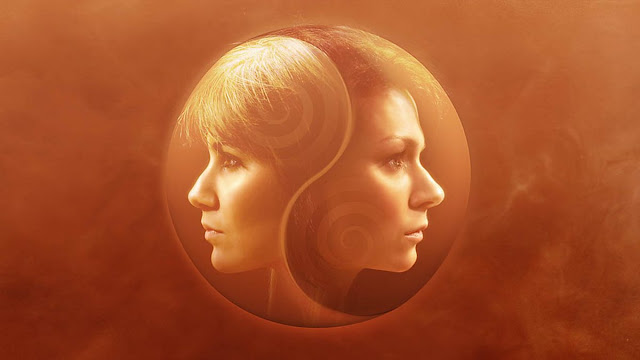 Abby and Zara were created by beings called The Grace to help save the universe in the Doctor Who Key 2 Time audio trilogy and were then left to fend for themselves. Abby was the good sister and was heavily influenced by her travels with the Fifth Doctor while Zara left nothing but a trail of destruction in her wake. With the ability to travel anywhere in time and space at will, Zara eventually washed up on the shores of the Sphere, a rapidly growing conglomerate of hotels and casinos held together but nuts and bolts. But she soon found she is stuck there, unable to use her powers. And what powers she has left are waning rapidly.

When Abby finally finds her sister, she is barely scrapping by using the remainders of her powers to influence the mind of a con-man who she relies on for food and a place to stay. And it doesn't take long for Abby to be sucked into life on the Sphere but her good-as-gold nature is severely put to the test. Will she emerge from the events about to unfold unscathed? And what is the secret Zara is holding?

Graceless comes with a warning that some material might be unsuitable for younger listeners. And indeed, it is gritty in places, dealing with both themes of sex and violence. As a matter of fact, the world of the Sphere and the relationship that Abby and Zara are forced to make with their benefactor Marek would make a feminist listener gnash her teeth. The idea of a woman offering sex for some relative safety is relevant in today's world and I'm sure one could have a marvellous discussion on whether it's damaging or simply realistic to depict the idea in a way that will keep the status-quo for a science fiction series. But regardless, the two-way manipulation between Abby, Zara and Marek make none of them easy to like, particularly when it is accompanied by a sleazy music suite that sounds like it has been ripped off an equally sleazy DVD in the background.

But if it is likability you need then we have David Warner involved. He is always a joy to listen to and Warner gets to wear a couple of different hats here. And he wears them with considerable style. First, as the enlightened law officer of a small town in twentieth century Compton, he is well worth the price of admission, especially when he gets paired with the likes of Patricia Brake as the village Pub owner, Nan. Actually, the acting is pretty damn good throughout the whole piece and with the exception of the music suit, the sound production is pretty good too.

Indeed, there are many things to enjoy about Graceless and having listened to a few more series' here and there, I know it does get so much better. This series though has a few messages that send a disturbing note to the listener about relationships between men and women and it would be really interesting to see the demographics for this little Big Finish series. Creator, Simon Guerrier raises some interesting notes for discussion about sexual politics while managing to tie them into three loosely connected science fiction tales. And that can't be an easy thing to do...