Doctor Who: The Blood Furnace - Review 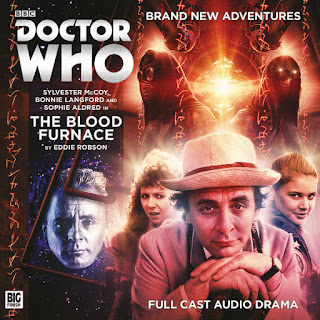 This is a story that really shouldn't work. The Seventh Doctor, Ace and Mel arrive in a newly reopened shipyard in Merseyside in 1991 where strange and sinister things are afoot. But this story is actually an intriguing and astute piece of fiction. There is social commentary aplenty in the form of university debt, represented by Mel's friend, Stewart and class warfare and the indifference when it comes to those in power and how they make the lower classes live. This is explored particularly well when Carolyn casts a spell which makes someone massage her feet.

But contrasting this is Ace and Orla's reactions to the horrors unfolding around them. It is in this pairing that the humanity of the piece can be found. I particularly liked how Ace showed genuine regret having probably killed someone when he life was threatened. The Doctor responds telling her she had no choice but if she didn't regret it, then something would be wrong.

Bonnie Langford's Mel is a little more fleshed out in this story through her backstory and relationship with Stewart. And Sylvester McCoy manages to walk the line between levity and gravitas very deftly here.

One thing that is missing is the chess-master aspect of the Seventh Doctor that would have fit in perfectly with the events unfolding around him. Still, McCoy's acting is brilliant throughout. Imperialism is touched upon slightly in this story when Carolyn explains that her species only attack those whose ways directly offend theirs.

The use of blood to make the ship fly is a play on ordinary people being sacrificed for the ambitions of those higher above. Also conveying this theme is the spell that Carolyn casts to make everyone work harder, so much so that it breaks down their bodies.

But in direct contrast this is the Seventh Doctor who uses his ingenuity and the creations of those he has encountered to save the day. There are a number of very human moments in this play.

Claire Calbray is excellent as Orla and her anger at Stewart for how he reports the death of a man to his wife is a brilliant example of how acting should hit home. There a couple of nice references to the modern series, including the Seventh Doctor using something he brought from a member of the Judoon.

Sophie Aldred is on good form once more and this only adds to the dynamic that she and Orla have. The music and sound design is also good and helps to convey the size and might of the ship.

So, this is a particularly surprising little tale from Eddie Robson on different social commentaries and the script is littered with good human moments...