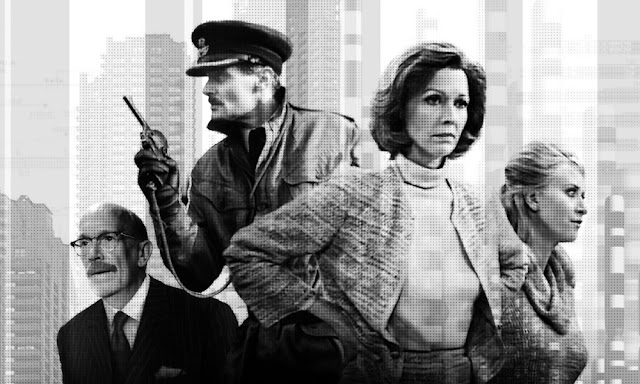 Counter Measures Series 2 sees The Intrusion Counter Measures Group come back. Rachel, Alison, Ian and Sir Toby return for a second set of adventures set in the 1960s, this time adding new cast member Templeton into the mix. The second series seems to distil what worked with the first while refining the premise but there is no reworking of the series like there was with Jago and Litefoot.

The first story of the set, Manhunt, by Matt Fitton is the strongest of the set. It puts Group Captain Gilmore on the run as he is apparently on the run for murdering and old friend. Rachel and Alison find themselves having to get used to new member Captain Aston while investigating the mysterious deaths of a group of scientists. It is a sharp, twisty and just the right kind of story - I figured out the story just before the characters did, which is exactly the right time to do this. This is a very character-centric story and all of them feel like real people with real relationships. We get a sense of that with Ian and the Waverly's and Alison and Astor, Sir Toby and Lady Waverly, they all think of each other. Actresses, Gemma Whelan and Lucy Fleming are absolutely brilliant and convincing and put a lot of thought into characters that could have easily been played as less. This is a gripping and effective start to the set.

The second story is The Fifth Citadel by James Goss which sees Rachel and Sir Toby investigating a radiation leak in the London Underground, while Alison and Rachel investigate mysterious dead bodies in a graveyard. This was a story I wanted to like much more than I did as it has such an intriguing premise but it spends too much of its time setting up what that premise actually is. And then, when that is worked out, it doesn't really do much with it. The link between the two plots is pretty contrived and then there is the ending. I get what Goss is trying to go for but it ends up being just as flat as it is performed. The events of this story don't so much climax as they do suddenly end. But congratulations should be given to Hugh Ross as Toby Kinsella and Celia Imrie as his old colleague Elisabeth Bradley for their excellent performances.

Peshka, by Cavan Scott and Mark Wright takes the team to Poland to watch a seemingly ordinary chess match. But like The Fifth Citadel, this one seems to have a much more interesting premise and there is too much of its running time devoted to the characters uncovering what the premise is and in this case sadly, the listener will work it long before the characters do! And it certainly doesn't help that this story features some striking similarities to last series' Artificial Intelligence.

This series comes to a-head with Sins of the Fathers by John Dorney. I really get what Dorney is going for with this story. Where the last series ended with something action packed, this one was supposed to be an emotional ending, focusing on the characters rather than the events surrounding them. But it doesn't come off quite like that as the characters don't learn things that would warrant the kind of emotional responses they give until late in the game. The reactions should exist but not necessarily in the ways they are performed or written.

But as always, the performances are pitch perfect. The writers and actors really do a lot with these characters and Simon Williams, Pamela Salem, Karen Gledhill and Hugh Ross make them feel lived in. I really wish that a better position for Alison could be found in this team though.

However, on the whole this series is far weaker than the first. Nothing in this one is bad but just feels a little more average than the first. The themes for this series are a little less resonant than the social control that ran through the first series. And though this is still an enjoyable series, it isn't quite what I, or the creators, were hoping for...