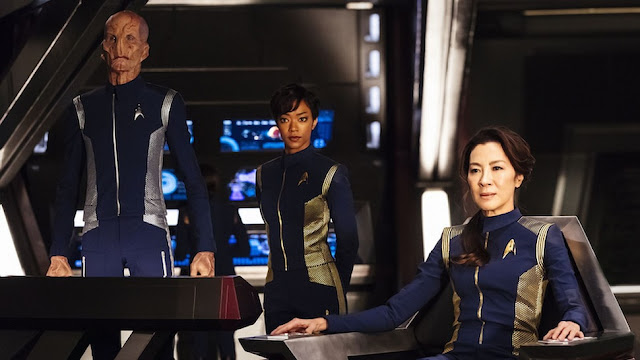 On my first viewing of the pilot, I was a little bit conflicted. While I was thrilled by the new characters, the writing and the vast majority of the strong visuals, there was also a few things that just didn't work for me.

Before I start I should say that I have been a Star Trek fan for many, many, years. I'm not someone who is coming to this new and will moan because they have no idea what is going on!

For me, the biggest problem with this episode was the Klingons. While these scenes get better with further viewings, on the first go, they were just plain boring. Not only that, I wasn't too keen on their change in appearence and I didn't enjoy that they were speaking Klingon with English subtitles at the bottom of the screen, even if I was impressed by the boldness of this move. There was no connection for me with these characters on screen. Had they looked like how they used to, there would have been more of a familiarity for me. Sadly, they don't have any personality beyond being brutal thugs.

The second main issue is that of Michael Burnham, who just isn't a good Starfleet officer. She is endlessly reckless, selfish, overly opinioniated, insuborndinate and then, when she doesn't get her own way, mutinous. And that all becomes clear within the first hour of meeting her. I loved the performance from Sonequa Martin-Green but I'm just not too sure if the weight of the show could be held on the shoulders of a character who goes against everything that is Star Trek. I guess will only tell.

With those two minor quibbles out of the way, let's talk about what I did like. Which was just about EVERYTHING!!! The look of this episode and the series as a whole was beautiful and it had visuals that leave all of the Trek-series' blown out of the water. Looking as sleek and as expensive as they do, it really draws to mind the movie look of the Enterprise in the JJ. Abrams' films, just without the lense flares and overly bright sets.

The uniforms are also interesting, working as a mixture of the Enterprise jumpsuits and the stylized ones that appeared in the Original Series. The technology on display is a little troublesome though. Of course, this is only to expected with the technology in the real world having progressed in the nearly twenty-years the show had been off the air. It is just made the Shenzhou appear more advanced than the first Enterprise.

But it is quite hard to talk about this episode on its own when it ends with a cliff-hanger for the next episode. Perhaps it is best viewed as a whole. Perhaps we are just used to each episode of Star Trek being different and this is the first proper-serialised series of Star Trek we've ever had. But boy am I looking forward to episode two...