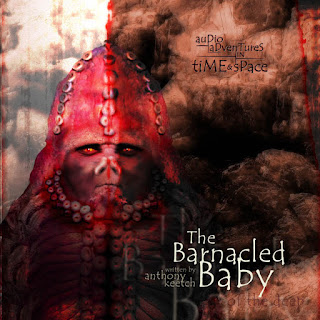 Stranded, alone, in Victorian London, a Zygon becomes the centrepiece of a seedy freak show. Weak and confused, the creature finds itself won over by the freak show's owner, who herself is in a state of grief over the death of her young son. Nick-named Bobby, the Zygon is seen as nothing more than something of monetary gain. And a member of high society attempts to purchase him from Jethro with no luck.

The story is obviously influenced by the plight of Joseph Merrick - AKA The Elephant Man - the Zygon, named Demeris, manages to survive the indignities heaped on from the dregs of humanity. Unlike Merrick, the Zygon spends the story trying in vain to contact his fellow species using a damaged communication unit and he is also dependant on the lactic fluid given by a Skarasan and Bobby, being breast fed by Doris, is one of the most disturbing things I have ever heard.

The Barnacled Baby is a very dark and twisted tale about human depravity and the horrors of everyday suffering and desperation. The Zygon himself is surrounded by some many horrible characters that when he does show his hand it is the pinnacle of a gory tale.

On screen, the Zygons remain one of the creepiest and most visually striking monsters and one would think that their ability to shape-shift would form the backbone of this story. But it is their monstrous appearance and need to dominate everything that sets them out here.

The cast and crew are fantastic in this tale. Deborah Watling and Clive Merrison are reunited too, having worked together in 1967's Tomb of the Cybermen. And it is Watling who is the real treasure of this release, playing Queen Victoria and a handful of other roles. I particularly enjoyed the twist right at the end with the Zygon turning himself into Queen Victoria just so he could rule the majority of the world!

Now, obtaining a copy of this release isn't easy but it is still out there on some online Doctor Who shops, EBay and Amazon - and still available for a good price - if you have a strong stomach and are interested in the more grim and gothic side to Doctor Who's nature, then this release is one for you...