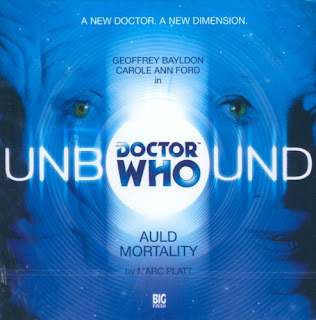 To celebrate Doctor Who's fortieth anniversary in 2003, Big Finish launched a new series that asked, What If? In this case, the story concerned what if the Doctor had never left Gallifrey?

The drama within this story concerns the meta of Doctor Who itself as well as concerning imagination and possibilities. But it is more than just that, it works as a story too. Also and rather enjoyably, it refuses to stick to one 'what if' storyline and spreads itself over a few over the course of seventy minutes. The Doctor is travelling with Hannibal across the Alps in the classic Who way but he is also a recluse in the cloisters of Gallifrey. And he has become Gallifrey's most popular author, his books are scorned by the many snobs of Gallifrey but loved by the masses. But what happened to Susan?

And Susan is sure as hell worth waiting for! This is a great turn for Carole Ann Ford in her original role, this Doctor's adventures feel like something from a magical children's show, just a lot more whimsical. The presentation of Gallifrey is a little skewered, not quite the same planet from The War Games, The Deadly Assassin, The Invasion of Time or Arc of Infinity. But one shouldn't focus on Marc Platt's fanon.

Perhaps the only thing that doesn't work in this audio is the villain. He parachutes in from the left field, giving a fairly different view on Gallifrey as a whole. But again, Marc Platt shows us that he certainly isn't afraid to fiddle with the mythology of the Doctor's home planet.

The dynamic between the Unbound Doctor and Susan is brilliant, much the same as it was in the classic series, just with the First Doctor being played by the late, great, Geoffrey Bayldon instead of William Hartnell. What helps is that Susan is much older and more confident and experienced person. It also works because Ford is given a much meatier role to play. Bayldon also captures Hartnell's mannerisms, if not quite his spirit, brilliantly, well enough to give her a brilliant foil.

So who cares if this story is a little muddled in parts, the ending certainly makes up for that. The final scene is pure magic and a fantastic if bittersweet celebration of what makes Doctor Who - Doctor Who.

Lets not forget, this was Doctor Who through the wilderness years, it triumphantly refuses to be relegated to the back of books and our memories and insists on the possibilities to come...