Doctor Who: The Spectre of Lanyon Moor - Review 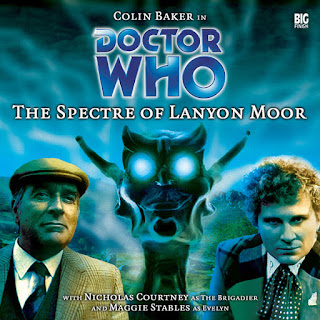 Perhaps the biggest problem with The Spectre of Lanyon Moor is that when you finish it, you'll want a whole series with the Sixth Doctor, Evelyn and Lethbridge Stewart! Unfortunately this is all we have with these three characters, so I guess, we have to make do!

This story gets off to a rocky start with some silly sounding troll-aliens but from there, the story only gets better. That part of the story takes place in pre-history and time quickly jumps forward to an archaeological dig at an iron age 'fogou'. The dig has stirred up some trouble with ghosts on the moor and Evelyn soon discovers that legends are far more than moonshine. But the Doctor has some particularly nasty suspicions about what is really going on and how to stop it, just before all hell breaks loose.

But despite some grisly scenes and a fairly predictable plot, this is a really enjoyable audio, almost entirely thanks to the performances from Colin Baker, Maggie Stables and Nicholas Courtney.

Courtney seems to slide back into his old role as if he has never been away, almost like he is slipping into a pair of slippers. Initially he seems shoehorned in as badly as he was in Mawdryn Undead but it does transpire that there is a good reason for the Brig to be there. It was nice to hear Evelyn and Stewart hit it off from the word go but there isn't enough time in the proceedings for them to work together properly. On the other hand, we get to hear the joy of the Sixth Doctor and the Brigadier going back into their old partnership, while Evelyn is sent off the uncover the B-plot. But all three characters face some harrowing situations but it is the Brig who rather steals the show.

I really appreciate scripts that make the full use of a companions resources and this one certainly does this. Not only does the Brigadier have all his previous experiences to fall back on but Evelyn gets a rare chance to flex her scholarly muscles, exploring a library and scouring facts so fast out of books that those around her are left very envious.

The guest cast of characters are your normal Doctor Who caricatures. From the stuffy archaeologist butting heads with the Doctor to the local baron who has something to hide. And we've even got a tea-lady who is far more interesting than she would have been in a 70s or 80s story.

Most of this story plays itself out in a 70s fashion with an 80s setting but there are a few surprises and twists to keep it from getting too formulaic. Overall, this is a story that feels like a nice homage to stories like The Deamons, The Stones of Blood and Battlefield.

It does get bogged down in some places by some plotting issues, juggling too many characters at once and the Brig never gets to shout 'five rounds rapid!'. But it is just that sort of tale. All that is really missing was the chance for Evelyn and the Brigadier to share anecdotes about their shared friend...