Doctor Who: The High Price of Parking - Review 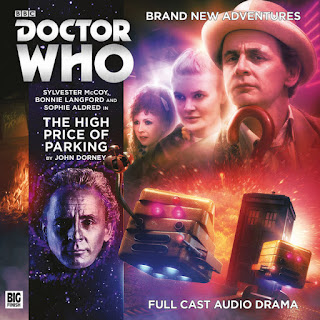 This has to be a first! After centuries of the Doctor landing wherever he wants, he finally falls short of parking regulations!

John Dorney gives us an unusual but effective story here, something which is very much in the mould of Paradise Towers or The Happiness Patrol, just done right. He seems to take distinct pleasure in tapping into an area of the McCoy era that is often overlooked, in favour of a Doctor who seemed to enjoy his travels rather than one who became a dark chess player. The Doctor is certainly not working to the same arcane plan here, becoming swept up in the events of a planet that is certainly an oddity even in the worlds of Doctor Who!

There are a lot of influences at play here. Including one bit that seems to be taken right from the mouth of Marvin the Paranoid Android in episode 5 of the Hitchhikers Guide audio series.

Dorney also plays to the strengths of the TARDIS crew, separating the crew for long enough for each of them to get a time to shine, bringing them into contact with the kind of oddball characters who wouldn't be out of place in the 1987 series.

As Sophie Aldred comments in the extras, this is a younger Ace a far less careworn version that the one with Hex. But it is obviously a much older and wiser Mel. She still has the wild optimism from before she left with Glitz at the end of Dragonfire. But now she has had a bit of that sheen knocked off of her innocence.

Director Ken Bentley also brings a strong cast into the production, with Gabrielle Glaister's, Cowley obstinately refusing to conform to stereotype. And Daniel Burnett's sound design and Jamie Robertson's music really helps to sell the idea of their strange environments.

This is a lighter story than the kind we have had so far this year, at least initially but it throws a few good curveballs into the proceedings along the way to keep things in this strange little story interesting...