A Look Back: Ghostwatch 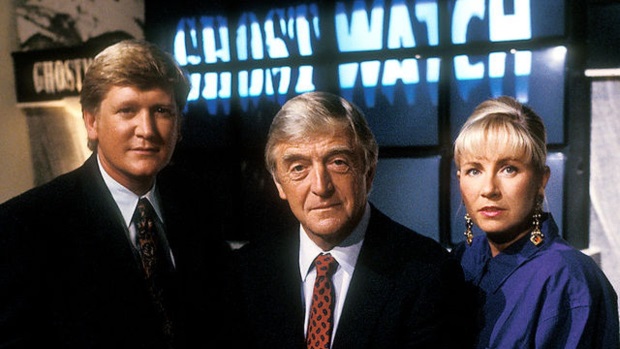 On Halloween night 1992, something very different came to the screens of us British public. A strange new BBC drama that was produced and presented in a way that made it look like a live factual programme. The programme concerned a family who claimed they were being terrorized by a horrifying ghost in their suburban home.

I wasn't born in 1992 so never watched it live. My mum however, can remember this programme and on her recommendation a few years do I sought it out on YouTube, before the DVD came out and I can honestly say that I had seen nothing like it before.

After its original broadcast, the BBC was inundated with phone calls and complaints, many were inquiring about the safety of the television presenters, while many others expressed sheer terror and horror at what they had just seen. Even the tabloids were quick to backlash at the BBC for exposing the viewing audience to such horror and how sweet little old ladies who sat in back in their comfy chairs, sip their tea and wait for their heart rates to slow down.

Here is the basic outline for the show:


The 90-minute film was a horror story shot in a documentary style and appeared as part of BBC Drama’s Screen One series. It involved BBC reporters performing a live, on-air investigation of a house in Northolt, Greater London, at which poltergeist activity was believed to be taking place.
Through revealing footage and interviews with neighbours and the family living there, they discover the existence of a malevolent ghost nicknamed Pipes from his habit of knocking on the house’s plumbing.
As the programme proceeds, viewers learn that Pipes is the spirit of a psychologically disturbed man called Raymond Tunstall, himself believed to have been troubled by the spirit of Mother Seddons – a ‘baby farmer’ turned child killer from the 19th century.

In the course of the programme Pipes makes various manifestations which become more bold and terrifying, until, at the end, the frightened reporters realise that the programme itself has been acting as a sort of “national séance” through which Pipes was gaining horrific power.


So there you have it. The first thing you have to consider is that this was screened in the very early days of the internet but people couldn't talk out their feelings on social media. And there was probably a large portion of the population who simply turned on their TVs and didn't expect something like this. In the many years following the original broadcast, the creators and presenters have gone on record to say it was never their intention to terrify people, just create something entertaining. I can see their point but I can also see the points of all those terrified viewers, I would be very surprised to find out that their wasn't a wish amongst its stars to confuse and disturb people.
The most important factor when it comes to how easily people were duped is that it used very recognisable faces of the time. Filming was split between a studio and the supposedly haunted house with a small camera crew following Sarah Greene around, while Michael Parkinson and Mike Smith relaxed in the relative safety of the studio.
Perhaps it was the inclusion of Parkinson which fully blurred the lines between fact and fiction for this piece. The man isn't an actor and isn't a television presenter in the simplest sense of the word. What he really is, is one of the world's finest celebrity interviewers. But he has such presence and a voice which makes you believe everything he is saying that he played his part with cold believability. He is the glue that holds this production together simply by being himself and every time he appears, even though you know this isn't real, it feels like a real, factual programme.

And then there is the star of our show, Pipes, the ghost who has terrorised an entire nation. He is very cleverly used, inserted in the programme in fleeting moments, some so fleeting, you'll miss him if you're not concentrating. Even more entertaining is that this show makes you question if you've seen anything at all, throughout the production their are 'viewers' who ring up and claim to have seen something, when the footage is replayed there is nothing there. Insidious did the same thing many years later, really making you look at the screen and questioning your sanity but Ghostwatch got there first and it works so much better here.

After a slow build-up, the last twenty minutes go all out in terrorising the audience and with a modern eye, it is hard to believe that any of this could have convinced an entire nation! I suppose though, we have to remember how different things where in 1992. There was no such thing as The Blair Witch Project, no found footage movies and none of the hundreds of Paranormal Activity movies. With a fairly naïve audience, this project was so far ahead of its time, it isn't hard to believe that it might have caught viewers off guard in the beginning.

With one of the children being physically attacked, Sarah Greene pulled by an unseen force into a downstairs cupboard and the television studio seemingly shaking itself apart with cameras moving, lights exploding, things catching fire and an unearthly wind howling through, Ghostwatch ends with Michael Parkinson seemingly possessed by Pipes. That is where it ends and it is a delightful thought to think that people actually thought Parkinson had been possessed by an actual demon!

Due to the backlash it received, Ghostwatch had never been repeated, indeed it was banned from having a repeat. It would be many years before it was first released on DVD alongside another BBC paranormal production, The Stone Tape and then released by 101 films. Of course, like everything else, this can be found online and is well worth a watch. You just need to remember that people nowadays aren't as naïve as they were back then.

But what I really love about Ghostwatch is that for forty-eight hours after its broadcast, thousands of people across Britain were properly scared.

But if you can't enjoy a good scare on Halloween, then perhaps you shouldn't have tuned in in the first place...﻿