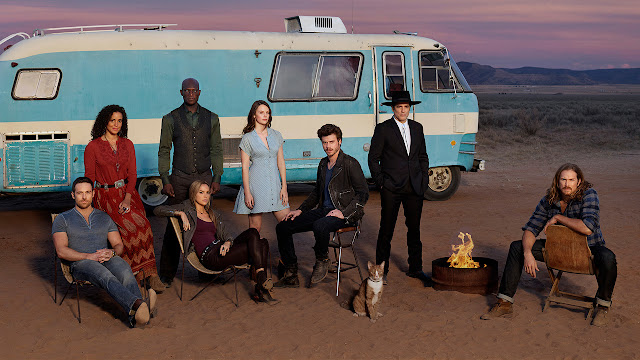 The exciting drama surrounding Midnight, Texas crosses over into this episode and it all concerns daddy issues. But with Midnight, Texas being such a fantastic show, those daddy issues are wrapped up in some truly bad-ass action scenes, dramatic moments and the right amount of laughs. Not only was Unearthed a brilliant episode but possibly my favourite yet. And with all the darkness coming to the town, the folk of Midnight need to bond, the more the better.

If you were like me and whooped at Fiji and Bobo's kiss at the end of the previous episode, well, we kind of had to hit the brakes on that train. Unearthed gives us a much more focused look on where Bobo came from and chances you won't like it. Following what I can only assume was a brilliant night with Fiji, the Sons of Lucifer fire-bomb his pawn shop and while he runs off to tackle the blaze, Fiji is kidnapped. Once the fire is out and Olivia and Lem are safe, he receives a threatening phone call, telling him that they have Fiji and what he has to do to get her back. As the episode continues we discover that Bobo's family are quite high up the supremacist totem-pole and on his way out of their lives, Bobo stole everything they had. One understands why he walked away from his disgusting former life but why did he feel he had to hide it from Fiji, now everything is all shades of awkward.

But don't fret, Bobo isn't the only town member who gets all the attention here, Manfred receives a calling card from the mysterious Hightower in the form of an equally as mysterious jack-in-the-box. But oh-boy is Manfred's backstory a good one. It turns out that he and Xylda conned the man together and swindled him out of one hundred grand! Of course, Hightower is crazy enough to have sacrificed one of his eyes to get the better of telekinesis as he is so power hungry he wants to bring magic back into his family bloodline. But the whole swindling gig involved Manfred marrying Hightower's daughter Violet. But he left her on their wedding day. She was so distraught that she kills herself a couple of days later so Hightower's debt goes far beyond the want of money. 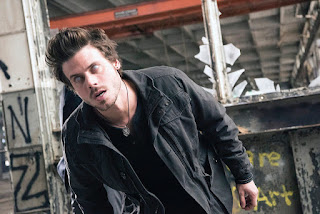 Creek doesn't know much about Manfred's past, just how he is running from it and she enlists Olivia to help him. Following Manfred, Olivia turns up at the abandoned train station but Hightower gets the better of them and they need a plan B. Hightower ends up being chained in the same room as Lem was a few episodes ago. Manfred is able and willing to settle the money debt with Hightower but as we soon discover, Manfred left Hightower's daughter at the alter and she killed herself not long after. Hightower has been carrying her corpse around all that time. Manfred does the right thing and tries to reconcile things between Hightower and his daughter. You can see he is tired of running and he wants to settle down. And that plan involves Creek.

Manfred and Violet have an interesting conversation but she ends up taking over his body to talk to her father directly. But then Manfred wasn't getting to the point and she wasn't having it. After telling her dad he was a terrible father, she tries to kill him using Manfred's body. Luckily Manfred is able to overpower her and he says how tired he is of people dying over their debt. In that moment, he is very genuine, Violet killed herself, his grandmother was killed and then Hightower commits suicide.

But it is Lem and Olivia who are the heroes of this episode. Olivia uses her bad-ass skills to help Manfred and Lem refuses to let Bobo take on the Sons of Lucifer on his own and in the end saves both Bobo and Fiji. To stop Fiji using magic to get her out of her predicament, she is drugged and it takes her a while to come back to full power. But things are made worse when we find out that she is underground and will run out of air whether Bobo saves her or not. But he is good to his word and brings them the guns and money. It is a good job then that the Sons of Lucifer are too dumb not to think that he came alone and Lem sneaks onto their base. With Bobo tossed in the cell with Fiji, Lem takes out almost the entirety of the Sons of Lucifer. But he takes a ton of bullets and Olivia is mad at him for putting his life at such risk. But without him, they would have lost Bobo and Fiji.

Fiji is able to hold her own in the cell and traps the rest of the air in a little bubble she holds over her's and Bobo's heads. Bobo wants to tell her his side of the story but she has discovered he was part of bombing churches. Instead, they stand there in awkward silence. Lem pulls through and Bobo kills the leader of the Sons of Lucifer with a grenade. I guess that the local PD are going to a hell of a time going through that mess. Almost everyone leaves this episode much more significantly damaged than how they entered it.

So, with all the daddy issues coming to the fore, just where does that leave the inhabitants of Midnight? Well, Creek finally tells her father about her and Manfred, she is an adult and can do whatever she wants. I am slightly surprised that she still wants Manfred around but even though he lied to her, she did see him trying to put it right again. I'm sure that Olivia and Bobo will continue on their bad-ass path even though she is mad at him for risking his life. Leaving this episode more worse for wear though is Fiji who thought she knew Bobo. She does but she doesn't. And with how little time there is before Midnight faces a reckoning, she might not have time to tell him everything she wants to. Lets not forget unimaginable power is coming to Midnight...