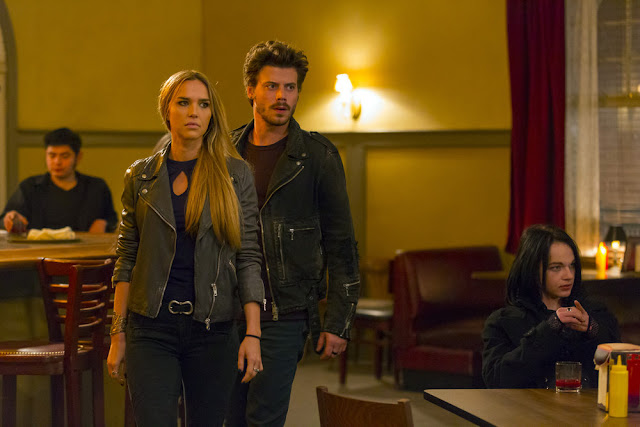 What had Xylda said, Midnight is safe? I wonder if a town with a body count this high could ever really be considered safe! In fact I think it is safe to say that we, the viewers and Manfred have discovered that Midnight isn't actually safe!

As one might guess from the episode title, the third episode looks at Midnight's resident vampire, Lemuel. The episode really works because previously, I had just guessed that his strange powers were the norm for vampires in this universe. But we soon discover that they aren't and that Lemuel is special. He has a really kind soul, one that searches for freedom and the ability to live with others in utter peace. This episode really succeeded in making me like him more than I already did.

With the focus put on Lemuel, there were a lot of flashbacks but even though it was enlightening to see some of Lemuel's tragic past, I'm not sure how necessary they were. More often than not, I felt they really disrupted the flow of the whole episode. As a result, so much time was spent in the past that the events in the present felt a lot more like an afterthought.

If you were to pick a moment where that statement rings particularly true the final confrontation is it. It was more than just a little weak as it was so incredibly easy to end the vampire threat. It felt very anticlimactic, especially since Midnight, Texas has been doing such a damn good job so far. But this is still early days and slipups like this are to be expected, while the solution to the problem seemed far to easy, it certainly didn't ruin my enjoyment of this episode.

Another strong thing in this episode was that both Manfred and Oliva got some good moments. I particularly liked that Oliva had a stake in her heel! Not only was it cool but it reminded you that she is a force to reckoned with.

With all of Lemuel's history we learn, we never learn how it was that he met Oliva. She still remains a very large question mark especially as I had always thought she was human. But she manages to go toe-to-toe with a vampire, even when he is using super-speed. One has to wonder if there is something about her that maybe even she doesn't know about yet.

Alongside the arrival of the vampires, a lot of the episode focused on developing relationships between two sets of characters. Creek and Manfred felt a lot more natural in their relationship than they have done. Perhaps it was because Creek was finally given some development with her father and brother. She manages to keep both of them calm while she did what she needed to be done to keep them safe. I really liked the moment she staked the vampire while Manfred was driving and then sat back down like nothing had happened!

The only real question I have concerning Creek and Manfred is why her father doesn't like Manfred. What exactly has Manfred done? All the time he has been in town Manfred has been nothing but the good guy and as Creek points out, in this episode he saves the whole town! So just why is her father so insistent that Manfred is going to lead her down a dark path? Hopefully this isn't an example of poorly manufactured tension and is an example of a good backstory for both Manfred and Creek's father. Wait, could Creek's father be the loan shark that is after Manfred?! Only time will tell I guess.

The second relationship to get some development isn't a romantic one yet. Lets not kid ourselves, I bet at some point in this season that Bobo and Fiji end up sleeping together, even if Bobo did squash any idea of something romantic down the road. This is the relationship that I feel a little uneasy about, it should be really cute and nice but the shadow of Aubrey is still looming over them. Bobo lost his fiancé in what feels like only a few days ago. Bobo and Fiji have always had a thing but to progress things this soon after Aubrey's death? The whole thing feels a little off to me...