Doctor Who: Lepidoptery for Beginners - Review 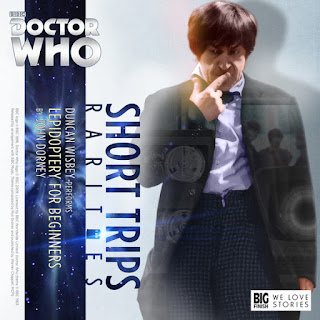 Lepidoptery for Beginners sees the Second Doctor, Jamie and Zoe being tormented by a particularly petty villain who turns out to be even more calculating than the Meddling Monk! It is a shame then that Iolas is far less endearing as he tries to tick every evil overlord trope from his tick-list, including heavy gloating and the revealing of his dastardly plans.

He is a classic example of a bad-guy stereotype, so much so that he wants to push a custard pie into Jamie's face. And since there is only so much story one can tell in stories like these, Jamie and Zoe are pushed to the background of the proceedings, with most of the audio playing out as a narrative between the Doctor and his adversary.

The story is particularly clever and plays with Chaos Theory and the notion of if its possible to change history after its already happened, something which is always a dilemma in a show about time travel. And the piece is finished by a clever twist, although you might work it out like I had and that makes this story more of a character piece than anything else.

Perhaps the biggest problem which plagues Lepidoptery for Beginners is the villain who hogs a lot of the running time, while the Doctor and his friends can't do anything but argue with him. Mix that, with the fact that Iolas isn't the most interesting creation and it makes Lepidoptery the weakest of the recent releases for The Short Trips: Rarities range. But there is a long suffering AI whose quick wit manages to make the running time pleasing enough.

This is a clever and humorous Second Doctor story that sometimes borders on comic book camp. Narrator, Duncan Wisbey does a good job of capturing Patrick Troughton's mannerisms and does good impitations of Jamie and Zoe. It is a story that reminds one of The Mind Robber and if you loved that one, you'll love this...