Doctor Who: Heart of TARDIS - Review 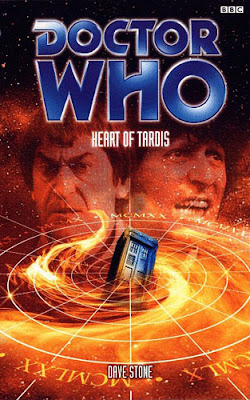 Out of all the hundreds of Doctor Who books I have ever read, it is those written by Dave Stone which I find the most delectably written. His prose is really the most outstanding in the truest sense of the word and just like the words he chooses to use, his method of storytelling is entirely his own. As a result of this, to many fans, Dave Stone is the best thing since sliced bread. To other fans though, he languishes at the other end of the spectrum, his work is original and witty but wacky and impractical. Unfortunately, Heart of TARDIS hides itself away at the backend of this spectrum.

My criticism for this book is that the plot is completely elusive. What makes this doubly frustrating is that what I could ascertain the plot should have been really interesting. It should have been exactly the kind of twisted-temporal tale that I am usually fond of. As ever, Stone's prose leaves us with far too much information, both relevant or otherwise, in such a high level of detail, that the plot becomes very hard to follow. To simply put it, the plot is overkill.

Heart of TARDIS is also drowned in continuity references. Don't get me wrong, a bit of continuity can give a book a great deal of weight but too much and the plot begins to drown amongst it. Here we get references to Rassilon, time wars, rogue TARDISes, and Stone's strained ability to try and reconcile the UNIT dating problem with, anything he can get his hands on.

But perhaps the craziest thing inside this book is its references to pop culture. The Second Doctor's part of the story takes place in the American town of Springfield, like Springfield from The Simpsons. Therefore, the book has a glut of Simpsons characters involved, Comic Book Guy, Dr, Nick Rivera, referred to as Dr. Rick, Dr. Hibbert. This makes the book feel all too surreal. But it isn't only The Simpsons that is referenced, The X-Files, Buffy The Vampire Slayer, even Queer as Folk get mentioned to lesser extent.

Thankfully, Stone's characterisation saves this novel from falling completely to pieces, particularly, The Fourth Doctor and Victoria. His characterisation is so good that it is almost worth picking up this book for that reason alone. You may even learn a thing or two, some readers had to look up a few words in the dictionary. But swamped amongst the references to pop culture and a completely incomprehensible script fail to elevate this novel beyond anything more than a confusing muddle. It is a great shame really, as it could have easily been one of the most interesting Doctor Who novels out there...