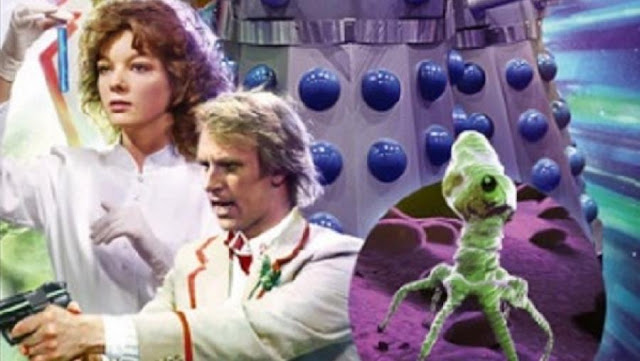 Alien Heart/Dalek Soul is the first of three releases featuring too stories which are loosely connected by a plot thread. But the problem is that one is better than the other and one can't listen to Dalek Soul without having heard Alien Heart first. If you are still confused by this format, think how Logopolis built on the plot threads left hanging by The Keeper of Traken.

Alien Heart doesn't feature anything we haven't heard before. The Doctor and Nyssa arrive just in time to be suspected of causing attacks, actually caused by some unknown menace, get separated and the thwart the plans of the actual culprit. After they are split, both the Doctor and Nyssa follow this formula, the Doctor falling in with a crowd of Earth Empire agents investigating recent attacks, while Nyssa is dragged off to an nearby planet where is a miner is suspicious of her. It's obvious that Nyssa isn't good at this sort of thing, but the pair both navigate similar perils, twists and turns. There are some grisly and scary scenes when the monsters finally make themselves known. Overall, the opening part of this CD release is a satisfying beast, if predictable corridor crawl, just another Thursday for the Doctor and Nyssa.

But it is all necessary for what comes next in Dalek Soul.

This is probably a story that one will want to listen too twice, mainly because the fun behind this adventure is being unnerved by what is happening and it really succeeds in keeping the listener off guard until the final reveal, (though I will admit to guessing what was going on pretty early on!)

But I will be vague about this story to avoid any potential spoilers. Sure there are Daleks and Nicholas Briggs continues to do his best in making these metal pepper-pots scary and the Doctor and Nyssa are at loggerheads, both helping different factions on a Dalek occupied world. The supporting cast for this adventure is slim, mainly because it focuses on the strain put on the TARDIS' team's relationship. Dalek Soul manages to dig down to the core of this TARDIS team in a way we haven't heard or seen since Circular Time. But if Circular Time was a nice, almost fairytale, look at them, then this is a nightmare.

Dalek Soul won't be as moving for people who aren't fans of this era or team but even so, it is a standout story from Big Finish. This CD is about pushing people to their limits and a reminder that there are those who are willing to push the boundaries concerning the kind of stories Doctor Who can tell...