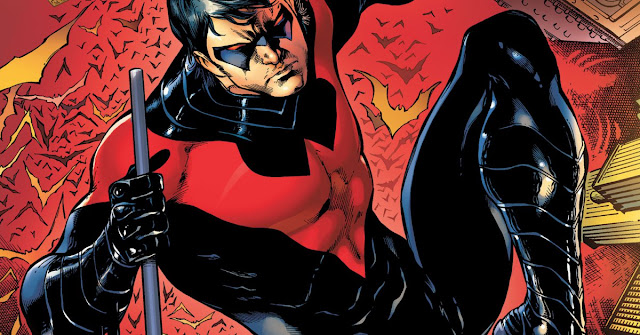 Its 2017 and I finally find myself playing catch-up. I am normally up to date with my Marvel characters but DC has fallen behind. Of course, this is because I don't usually enjoy DC too much, but gradually, over the years, I have found myself reaching for DC books. Now in their Rebirth phase, I have decided to read as many of the books released for the New 52 reboot, started in 2011. So I find myself with Nightwing: Traps and Trapezes and I should say that Dick Grayson/Nightwing is my favourite DC character. So on that note, I will try to make this review as unbiased as possible!

September 2011 saw the DC universe undergo a reboot and Nightwing was one of the last comics to be released. But one could read it without having had to have read any of his previous adventures. No background knowledge was needed and the first volume isn't an origin story, Nightwing is already an established hero.

On writing duty is Kyle Higgins and he does a pretty good job of his characterisation in Dick Grayson. Part of what makes Grayson a delightful character to read is his demeanour. He often makes sarcastic comments, even when engaging himself in fisticuffs and is usually seen with a big smirk on his face. And, oh his face, his face often leads to the characters - be them male or female - commenting on his charm, good looks or incredibly physique. I was glad to see that this aspect of Dick Grayson wasn't changed and Higgins does a brilliant job of conveying the situations without jumping straight in or making them sound corny and without going overboard on any particular topic. And while the writing isn't that good, it isn't bad enough to warrant complaining about.

This story focuses on Dick going back to his roots in Haley's Circus with the circus being the place his parents died. That in turn is what led to Bruce Wayne adopting him. Through a series of very unfortunate events, (see what I did there?!), Dick is greeted by some members of the circus he used to know. But it is these reintroductions for Dick that can make the pace of this book feel very uneven, one issue in particular feels like a real filler, but it is a good job that overall, it is an engaging and enjoyable tale.

Say what you like about the writing but the art from Eddy Barrow's is beautiful, and he does a brilliant job of creating those iconic Nightwing poses, epic moments and landscapes. One area where Barrow's particularly succeeds is the lighting which he uses to make the moment look more dramatic or to emphasis how cool something is supposed to look.

This Nightwing story isn't what I was expecting and it puts a little bit too much emphasis on Dick's past than his present and this isn't me saying that this book is bad, just not what I was expecting it to be. And that is partly to do with how close this book is to Scott Snyder's Batman book that was running at the time. With Higgins and Snyder telling two parts to the same story, they both do go off on little adventures of their own. And this could have been one of the best points of this book was the Court of Owls' storyline, assuming you liked that plot line.

But Nightwing is still brilliant, Dick Grayson is brilliant. I have always preferred him to Batman and who doesn't like Dick?