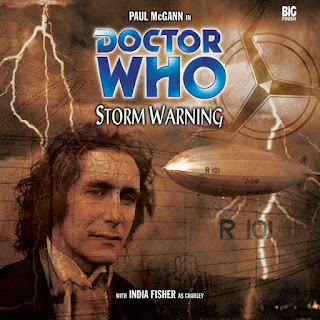 Storm Warning was a special release for Big Finish, it was the moment they got Paul McGann back, playing the Eighth Doctor since his Television Movie in 1996. It really serves as a pilot to a new series and like all good pilots, it works as a modest beginning but promises bigger things to come.

The Doctor finds himself upon the British airship R-101 and he meets Charley Pollard self proclaimed, 'Edwardian Adventuress', whose disguised herself as a cabin boy. It sure sounds like the start of a brilliant adventure. But there are two problems. One the airship didn't last long in real history and two the Doctor knows the ship is doomed to crash over France.

On my first listen to this adventure, I really enjoyed it. The story has a warmth and a breathless wonder that was sadly leeched out of the later series of the classic television series and can be forgotten in some of the Big Finish works. Paul McGann remains as charming as he did in the Television Movie and India Fisher as Charley Pollard really strikes out on her debut adventure as a likable and headstrong companion. And best of all, this story is a historical and I like historical adventures that inspire me to look up the history that never got taught at school.

Another thing that is striking about Storm Warning is how great the secondary characters are, something that Big Finish has had problems with in the past. We've got a blustery old English aristocrat, an earnest young engineer who is trying to talk sense into his superiors, a stolid lower class passenger, a sinister foreign agent and a passenger who turns out to be worth the lives of all the passengers on board!

The problem with this story is that it is more simplistic and old-fashioned than some of the Big Finish released that had come before it. It only served to remind me that the original series was only aimed at children and teens. And there was far too much talking! The Doctor talks to himself because he doesn't have a companion, but when he gets one - he is still making speeches in the middle of action sequences! Sadly this results in Paul McGann sounding like he is performing a piece of theatre, not taking part in a television dramatization.

But this is a fairly good yarn, with only minor blemishes. Paul McGann got much better in later releases because the material really improved quickly. And this isn't a story to skip as it plays into the Charley arc later on down the road...