Doctor Who: Seasons of Fear - Review 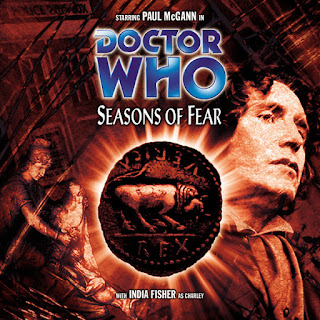 And there is a lot that I liked about this tale and for one thing, it really is the epic scale of it. First, the Doctor encounters Sebastian Grayle, a man who claims to have killed the Doctor, or rather from the Doctor's perspective, will have killed him. He also tells the Doctor that the Earth and indeed time itself belongs to him and his masters. So the Doctor and Charley are determined to stop Grayle, even if it means changing history to do it.

With each of the four episodes focusing on a different period of history, the play is very similar to The Keys of Marinus in times of its place changing. That was also another story with an epic scale that had the 'quest' theme intertwined in its plot.

It is surprising then that the 'quest' theme wasn't included in more of the Classic Doctor Who serials. Sure, The Key to Time was a quest but that was one pulled over six different stories. It is nice to hear this theme get picked up on audio, particularly as the television show would never have had the budget to pull something like this off convincingly.

And Sebastian Grayle is actually a good villain. Initially he is simply misguided at the start of his long life. He is still willing to sacrifice others but does have a few morals. But as time gradually goes on, he grows colder and more dangerous and out of all of the villains that the Eighth Doctor has had on audio, Grayle has to be one of the best.

I also enjoyed hearing the Doctor play the fool and how he really came across as Tom Baker's, Fourth Doctor, could sometimes do. Actually the whole play had the same feeling that City of Death did, but there are a few moments when the Doctor has to get serious, particularly when he is facing off against Grayle. It is in such moments that Big Finish really give us a clear clue as to who the Eighth Doctor is, he is similar to one or two of his predecessors but has enough of an emotional core to make him is own man. And while Seasons of Fear isn't a good example of this Doctor being pushed to his limits, one is forced to think that by this point, the writers had a pretty good idea about who this Doctor actually was.

We are also given a nice little twist, something Big Finish doesn't often do, the Doctor seems to spontaneously narrate some of the action, for no apparent reason. Of course, there is a reason but to say anymore would spoil the surprise but needless to say, it comes into play later in the Eighth Doctor's run...