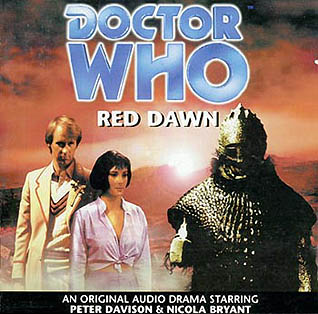 Justin Richard's script promised so much. It promised a more interesting look at the partnership between The Fifth Doctor and Peri and the first contact moment between humans and the Ice Warriors. But sadly, this story is just as dull as Doctor Who can rarely get. It should have been called, Red Yawn.

But just what was it that went so wrong? Well, I think the first thing is the voices of the Ice Warriors. Though they are well dubbed and sound like they did on the television, actors, Hylton Collins and Matthew Brenher, don't come across as much of a lumbering threat. And Richards doesn't help by portraying the Warriors in the same way as the Pertwee years did, they are noble warriors instead of the lumbering menaces they were during the Troughton era.

And the villain of the peace, Paul Webster doesn't have quite the same ring to it as Davros, Omega or The Master do. The character is a complete bore who is nothing more than a spoilt, unscrupulous brat who comes from a privileged background. But perhaps what is most damming about this story is that little happens over its four episodes. Peri is caught up in a dull space disaster and the Doctor has to play the usual, peacemaker between the humans the Warriors. There is nothing new or interesting.

But a more positive note is the performance from Georgia Moffatt, Peter Davison's daughter as the really interesting character, Tanya Webster, a Human/Warrior hybrid, created by the Webster corporation. Throughout the adventure her presence on the NASA mission feels like a bit of a mystery until the truth about her origins is revealed.

The first episode of this play is really good. The Doctor and Peri arrive on the freezing cold planet of Mars. The opening episode as a real sense of awe and mystery about it, but then things go downhill fast from episode 2 onwards.

This story is a great chance to enjoy hearing Peter Davison and Nicola Bryant acting together for the first time since The Caves of Androzani. Androzani was the only solo story for the pair until Red Dawn and it is interesting to hear their performances, it is like the pair were never away. So I guess one can overlook the weak script and just enjoy Davison's and Bryant's acting and if you can suspend your disbelief that Peri wore the same skimpy outfit for all her audio adventures fitted between Planet of Fire and The Caves of Androzani, then things will really get better...