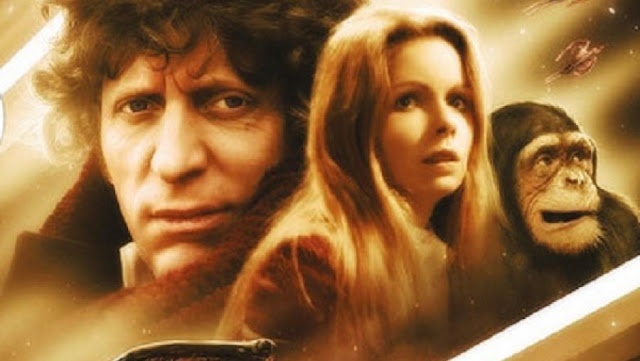 I think it is fair to say that the Fourth Doctor Adventures range has always been one of the most conservative of those but out by Big Finish. The stories are designed to fit into their intended eras but they sometimes sacrifice originality and ingenuity. But that has gladly been changed over more recent years, especially with many of the releases in this sixth series. Dethras not only features an interesting core concept and setting to bolster its atmospheric and engaging mystery but it also incorporates 1980s, Series Seventeen's lighter stylings and mixes it with the darker and more sombre tone of Series Eighteen.

Finding themselves on-board a World War 2 submarine, The Doctor and Romana find a number of terrified crewmembers and a chimpanzee. The pair quickly become intertwined with the grander mystery both inside and outside of the ship. The first episode is a slower affair and that is understandable as it builds up the mystery by confounding us with strange facts and clues. The slower pace of the opening episode allows for some of the guest cast to have a time to shine, while allowing the story to have a chance to change. Of course, there is nothing stranger than the chimpanzee turning around and actually talking!

But this story is another victim of the two-episode formula. The second episode feels a lot more rushed as there is plenty of exposition to get through which needs to give us a satisfying conclusion. This is no fault of the author's, Adrian Poynton, who understandably needed to do this as Dethras's past gets revealed and begins a more wordy affair before the action picks up again in the finale. It is a sign of good writing that the fictional plans of Dethras actually give us an interesting look at the morality of peoples actions and how they have to live the consequences of them. Thanks to this factor, what could have been a frivolous adventure becomes an interesting look at deeper issues.

Of course, this story is bolstered by a good cast, direction and sound design. Tom Baker and Lalla Ward are both on top form as usual, despite the uneven and rushed conclusion to the tale. But overall Dethras is a good entry to the world of the Fourth Doctor from Big Finish. It isn't the kind of story which would have been made in the 70s or 80s, especially with the importance of the chimpanzee as events unfold. Poynton writes brilliantly for the Fourth Doctor and Romana and the pair really shine here and they help to give the story some cohesion amongst the story's maelstrom of confusion and experiments.

It would have been easy enough to stretch Dethras out to four episodes because the nuances of the play would have probably lent themselves a lot easier to that format rather than just two episodes. But the story does make the most of its running time and creates an interesting mystery with a satisfying conclusion...