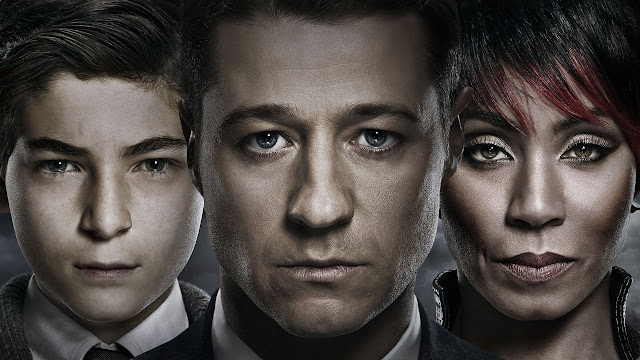 I suppose, before I begin, I should get my main criticism's of Gotham out of the way. It doesn't feature Batman. Sure, it features Bruce Wayne, but it doesn't feature Batman. From the moment the show was announced, I was interested to see what it would do and sure, I did enjoy it. But the show proved what I had said all along, you can't really make a really good show set in Gotham without the Caped Crusader. And sadly, the first season, for me, never really got out from Batman's shadow.

Another problem with Gotham is that it continued to struggle finding itself. It really did crumble under the idea of being a prequel series to a Batman show which will never come. The first season had really issues with tone, story and character consistency. And to a more shocking degree, its ensemble. It seemed to feel the need to include characters it didn't need into stories it didn't need. And the needless overcrowding was what really managed to let the show down.

There are many examples of stories which didn't need the inclusion of the Penguin, Fish Moony, hell, even Bruce Wayne. But they were all shoved in anyhow and each of them were given morsels of story. It really showed that the producers were trying to stretch the show to fit its 22 episode count. Look at Fish Moony's encounter with the Dollmaker, totally unnecessary. Especially when she turned back up in Gotham for a few more episodes before being sent packing again. We wouldn't have needed to see her time with The Dollmaker and she could have still turned back up looking ridiculous and the story wouldn't have felt like anything different.

The show also spins its wheels quite a lot, repeating many of the same beets over and over again. Gordon getting in over his head in a case and being hunted down by fellow cops, Gordon asking Penguin for a favour. And Penguin playing both Maroni and Falcone against each other. All these things bogged the series down.

Payoffs where also another big problem for the series. Both the mid-season finale and the actual finale faltered in big ways. All that was left, after the show had set up is M.O. in the opening 10 or so episodes, was the idea of how cool it would be to see this child villain fighting Batman one day once they had both grown up.

And Gotham certainly isn't an 'adult show'. Sure, Penguin goes around stabbing people and there is a scene featuring a bondage scene. But nothing here is beyond the imaginings of a young adult mentality. All of the murder cases were rudimentary, the love stories simplistic and the gangland scenes were dull and half-formed. And the excuse that it is just a comic book series won't wash either, no longer is this a genre write off. At its core, Gotham feels more built towards youngsters than older fans. It dabbles in darkness with shootings and stabbings but anything particularly sexual is glossed over, almost as if the show is blushing. The Ogre's BDSM gear is nothing more than window dressing and nothing is made of the fact that he sexually abuses his victims for months beforehand. And Barbara's bi-sexuality is brought up before being dropped entirely along with the Major Crimes unit!

That is why honing the show's tone should have been so very important. Gotham can't decide if it is going to be dark and demented or cozy and cartoonish. Edward Nygma, for example, never once feels like he inhabits the same world as Gordon and Bullock, he really feels like he has stepped out of a different show.

But lets now focus on what did work. Gotham certainly looks good and healthy, with Ben McKenzie and Donal Logue making an interesting police duo. Robin Lord-Taylor is fantastic as the Penguin as is Sean Pertwee as Alfred. It is common knowledge that Jada Pickett-Smith's, Fish Mooney came under quite a lot of flack from some comic book fans. Personally, she doesn't bother me too much. Where her character falters is when the show decides to follow her story after the mid-season finale. She was interesting when she was devious and was trying to undermine Falcone, but as a character, Fish Mooney was never one who warranted an extended focus.

Let's look at Barbara. I liked Barbara, there I said it. She was another character who came under a lot of flack. And sure, she was dull as hell for the first half of the season. But she soon gets better in the second half. She is the only example of a character who needed the twenty-two episode count to benefit her development. It is almost as if the producers decided that if she was going to be nothing but a fragile mess, then they might just as well go all the way with it. By the end of the season, Barbara is psychotic. She goes through two, equally as traumatic kidnappings and come out of the end as a really crazed murderer. I really liked that. She is now well and truly set up to become the show's Harley Quinn!

If there is one thing that Gotham needed to do in the first season and still needs to do now is to drop the Batman foreshadowing. Don't lead up to Batman. Introduce the Joker properly, give us a proper Riddler. Have Jim Gordon be this show's Batman. Hell, even kill off Bruce Wayne, allow Gotham to be its own thing entirely!

Gotham sure looked good and had a really strong cast. It gave us our first truly brilliant Penguin and gave us a lot of Easter Eggs to enjoy. But it sadly felt like an uncomfortable hodgepodge of every single iteration of Batman that had come before it. And that was before it tried to merge a dark and depressing tone with a kooky and cartoonish one! The show was also sadly plagued by consistency issues and had no regard for tone, story and characterisation...