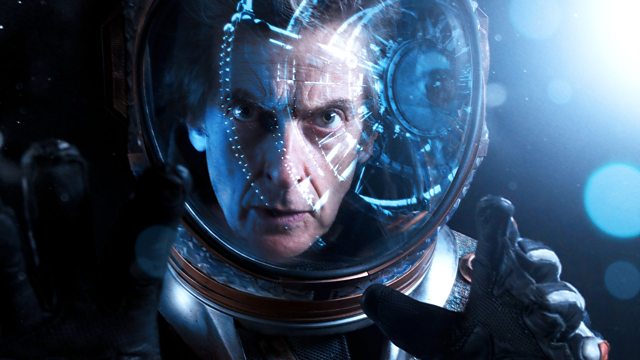 Oxygen should really have been a two part story.

Now, you have to understand that some care should be given when making that statement. But then again the same thing has probably been said by people about every single episode of Doctor Who. This logic cuts both way, a bad episode could be improved by a second episode but then a good episode would become a bad story if another episode was added. But Oxygen is a story which could have ended with the Doctor saying he was blind and the second episode continuing their escape from Chasm Forge.

But this review isn't about rewriting Oxygen, so lets look at this story in this way, it gets better with a re-watch. And that isn't something unusual in the world of Doctor Who. This episode more than deserves a second watch, just to see how much Jamie Mathieson actually crammed in. 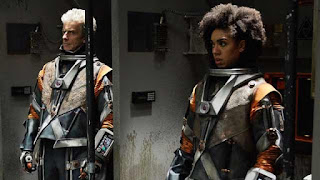 Throwaway dialogue and moments connect together later on and his big critique on capitalism is more layered than it might initially appear when you take this story as read and later ponder on the deeper meaning of the dialogue. A big takedown of capitalism feels as relevant now as it will ever be and the notion of selling your workers oxygen is a particularly sadistic view of the future. Of course, Doctor Who has gone into this kind of bleak money driven future a number of times with stories like The Sun Makers and The Happiness Patrol being particular examples and these types of stories tend to be more popular when subtly is thrown out of the window.

Like the examples stated above, Oxygen is best when it is straightforward and often verging on over the top. The Doctor's line about fighting algorithms was brilliant as was the following comment about fighting the suits, but there are other smaller critiques threaded throughout the episode which don't quite register as part of the larger message. Now some people might appreciate this but I can understand the aversion to preaching. But then if you are going to write an episode of something exploring the evils of capitalism then there is no point of underplaying your hand.

But Oxygen is dense to the point of being overstuffed. The guest characters are just sketches in terms of the episode's overall arc. Abby goes from believing in her bosses and distrusting the Doctor to her giving him approval to open the doors to their suits so he can take revenge on their systems. Ivan loses his love Ellie before the opening credits roll only to act to like a completely different person at the end when her dead body gives him her oxygen canister. The only purpose of Dahh-Ren is to set up some comedic moments between himself and Bill's unmeant space racism. And then the episode only has the time to get in a few funny moments before having to move on. And then there are few side notes on the future of capitalism, Tasker's mention of some long lost union is a fun little nod to how labour will one day fall into the realms of mysticism. But again, the episode doesn't do anything with it despite mentioning it in passing. 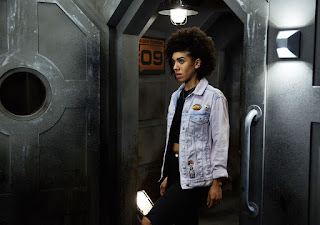 And yet, everything the episode is really trying to say is there, just bubbling below the surface. Oxygen has all the components of a truly great story just crammed in to the point that it sticks closer to just being quite good. Now, it is hard to fault a television episode for being overambitious, least of all a Doctor Who one. This is easily the best look into the space faring future that we have had so far, with director Charles Palmer returning after having directed Human Nature/The Family of Blood in 2007, he should be praised for convincingly portraying the strange and weightlessness of space on a television budget. Peter Capalid and Pearl Mackie are still brilliant even if Mackie doesn't get as much to do here than she had done in the previous four episodes. Even Matt Lucas was good as Nardole, the Doctor's secondary companion. But with so much stuff happening at once, the space walk as Bill flits in and out of consciousness plays itself as half of a narrative decision and half as a necessity to keep the action moving, not many things in this episode land as they perhaps should.

During the first fifteen minutes to half hour, Oxygen is more sure of itself, with its pacing kept nice and tight. The Doctor, Bill and Nardole's exploration of the deserted space-station mirrors that of The Fourth Doctor, Sarah Jane and Harry's in The Ark in Space, something which is always good to recall. To my surprise, Nardole's inclusion on this particular mission leads to some interesting new avenues being explored. He is the rare companion who will join the Doctor here and there with only Captain Jack and River Song rivalling him.

Nardole's early efforts in this story are about trying to get everyone back to the TARDIS as soon as possible, which does have the opposite effect and the Doctor digs his heels in, staying where he is, well, that and the distress call that the Doctor had received. Unlike Bill or any other companion we have ever seen, Nardole's interest is not really in exploration or not even getting people to safety, just getting himself back to the TARDIS. Here again, this episode should have taken the time to explore why Nardole is so obsessed with protecting the mysterious vault and take more time to explore his motivations in the middle of the episode, where he appears to just be along for the ride as well as being the one to deliver wisecracks and exposition, which makes his sudden shouting-fest at the Doctor at the end of the episode all the more shocking and surprising. And while the final scene is compelling in its own way, thanks to the writing, direction and some good acting but it only serves to empathise the abrupt shift in tone. But the moment does still feel in keeping with the rest of the slightly rushed episode. 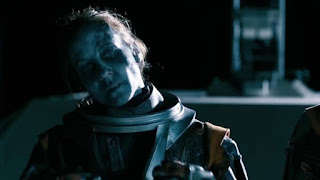 But perhaps my biggest episode with this episode is the monsters - if you could even call them that. Maybe it is more the look of the monster, the automated suits still carrying around the corpses. Now this a brilliant and macabre idea for a creature. But that is what they come across, one can't help but look at them and not think they are zombies, rather than it just being the suits themselves coming to life and the corpse just going along for the ride. There is a way to thread that kind of dehumanization into the idea of capitalism and it is in this episode if you squint and look at it sideways but it isn't there enough for the connection to be properly intuitive. And with the Doctor's comment about fighting the suits, it makes the image entirely counterproductive.

And the zombies - I know that wasn't what they were but what I'm going to call them, not least because Pearl Mackie seems to do a good job of acting like a George Romero extra - also detract from the second point of this episode, that space is a lot more dangerous than we actually believe. And this point is at its most effective when the characters suffer from lack of oxygen or pressure. The zombies just serve to push the action back into the realm of Doctor Who, giving the audience something visual to be terrified of. And this does nothing but undercut Mathieson's writing and Palmer's direction when it comes to trying to make space something to be terrified of.

I'm sure you've guessed that I found plenty to critique in Oxygen but that is a perfectly good sign, meaning there was plenty there to talk about anyway. Like most of the other episodes so far in this particular series, the episode is densely packed with great ideas but it is hard to tell how much more screen-time it would have need to develop a more of those ideas to a satisfactory place. However the actual forty-five minutes of this episode makes the best of what it can include and while the final effect doesn't come across as nimble as Thin Ice, Oxygen sure as hell has a lot to offer...