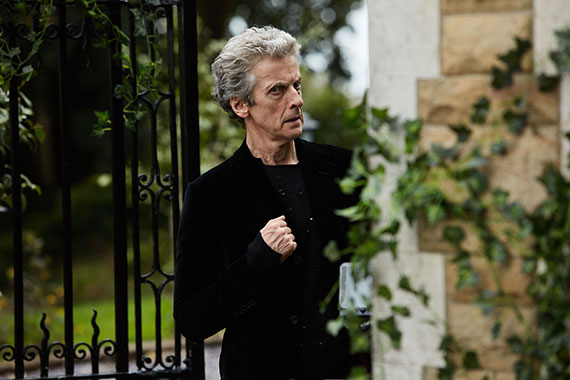 It is a very rare thing indeed that Doctor Who will embrace a new genre as much as the first thirty minutes of Knock, Knock do. For the first two thirds of this episode, this is a straight up horror movie, complete with all the tropes. We've got a spooky house with an even spookier landlord, a bunch of thinly sketched youths who are all, quite possibly, complete idiots! And then there are the loud noises, eerie music and doors and windows opening and closing by themselves. It all seems quite old fashioned but old fashioned in a good way.

And it is too the credit of newcomer, Mike Bartlett that he doesn't take this episode as an opportunity to deconstruct the horror genre, something that other episodes have done in the past. By dumping the Doctor and Bill into this scenario and the Doctor not being some idiot, at least not in this incarnation, leads to some interesting inversions of the horror genre and their tropes. And he writes this story in such a way that you could have removed the Doctor from the proceedings altogether. Bill is clever enough to work out the shady past of the Landlord all by herself, just as the Doctor does. 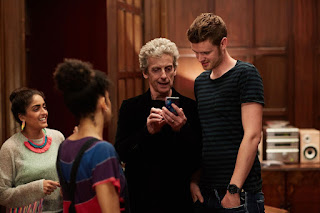 But it is around the scene where the Doctor is pleading with the Landlord for the life of Harry that this episode goes from all-out horror to classic sci-fi Doctor Who. The emphasis goes from simply surviving to solving a mystery and it is here that the nature of the Doctor and his superior knowledge, alters the kind of story we have just been watching. For the first thirty minutes we are watching young people get into trouble and danger, with the Doctor kind of being the honorary member of this particular merry band. Following this story along those lines would probably mean the Doctor and Bill escaping the malevolent force by the skin of their teeth with their friends having been killed for the sake of destroying the house they have just escaped. And one can't forget that Doctor Who isn't above killing its guest characters, the Fourth Doctor story, Horror of Fang Rock is a particularly brutal example of that.

Knock, Knock makes us change our focus when we meet the Landlord and his wooden mother. And then the Doctor and Bill go from being horror movie survivors to the TARDIS crew trying to understand the alien incursion. Their own experiences in the house become subordinate to their empathy. And that isn't a bad thing either, it is just a little weird watching a story undergo such a shift in such a short space of time on its first viewing. The first half hour and the final fifteen minutes of this story are both brilliant and wonderful but it is the lack of cohesion between them both serves to undercut them both. 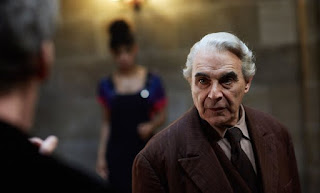 This could have been an even bigger problem if the episode hadn't been gifted with some really excellent performances. Four people stand out, Mariah Gale under her wooden makeup, Peter Capaldi as the Doctor, Pearl Mackie as Bill and David Suchet as the mysterious Landlord. Much like Peter Capaldi, Suchet choices to underplay his performance, suggesting that he is a man less evil than he is broken or incomplete which perfectly fits someone who has never really left his tragic childhood. It could have been a temptation for Suchet to sow a few hints of menace from the very beginning but it is only when Harry stupidly asks about the strange tower and inadvertently puts the life of Eliza, (Mariah Gale), in jeopardy, that the Landlord snaps, even if it just for a moment. And the psychology behind Suchet's performance is brilliant too. For the most part he is playing a child pretending to be a grown up, then he is a little boy being cruel to those who must die to protect his mother. And then it all falls away as his mother realises who she is and treats him like a son for the first time in decades.

Still, Knock, Knock is only partly about Suchet's character, most of the time the episode focuses on Bill and it is here that we see a different horror aspect coming into play. Bill has to face the exquisite embarrassment of her friends meeting the Doctor. While many of the new era companions have had family members and lovers involved in their adventures, very few have found their friends caught up in proceedings. Ace had Shireen, seen in Survival and Donna had an arch-nemesis Nerys, seen in The Runaway Bride. It is very rare for Doctor Who to actually explore this side of a companion's life. Bartlet's script continuously points out how out of place the Doctor is in this setting, with Mackie and Capaldi wringing ever ounce of comedy out of the Doctor's continued intrusions. 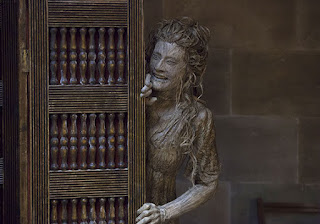 This kind of character work complements the horror aspects brilliantly. After all, it is often a trope in horror that the youngsters have to act like complete idiots, for the plot to work. And in this aspect, Knock, Knock is no different. The problem arises when it has been established that Bill is no idiot and there is nothing she sees in this episode that is any stranger than things she has already seen. This episode makes it clear that her occasional obliviousness is a character trait, an indicator of how much she wants to keep the Doctor and her personal life separate.

Even then though, Knock, Knock is careful to keep Bill the bravest, most intelligent member of the group of youngsters. She volunteers to see what is making the creaking noises and she works out a good chunk of the plot. And some of the notes in the margins are obviously there to ease the strangeness of placing Bill in a scenario that sees the brutal murder of all her friends. Firstly, only Shireen is someone she knew before this story and secondly, all her housemates come back to life at the end, a wise move considering how much death bothered her in Thin Ice.

And one last thought. An episode like Knock, Knock underlines the differences between Bill and Clara when it comes to their adventures. This is in part because Clara started out as a mystery to be solved and she never progressed beyond the archetype of a traditional Doctor Who companion. All of Clara's actions felt like they could be traced back to her role as the Doctor's companion or because they served the plot well. And she isn't unique in this, Martha was just the same as where Amy and Rory after the first Steven Moffat series. Doctor Who did eventually discover what suited Clara best and they were what spoke to her role as a companion, her love of adventure and growing similarity to the Doctor and even her romance with Danny Pink was compelling because of what they said about the show and its narrative conventions.

Bill though exists independently from the Doctor, even if Knock, Knock sees her failing to keep the Doctor out of her personal life. She follows the likes of Rose and Donna, characters the show took the time to develop outside of the TARDIS. Bill's desire to find a place to live, dealing with Paul's advances, her friendship with Shireen and her hanging of her mother's picture in her abode would make compelling viewing even if she had never met the Doctor. And this makes it richer when Bill contributes to the role of companion in this story as she points out the impossibility of the Landlord being old enough to be the father of a middle-aged daughter. And the impossibility of a father coming across some space termites and showing them his sick child. These are just practical objections that may not be directly informed by the traits and motivations that I have mentioned elsewhere in this review - but notice how Bill pauses when the Landlord challenges the Doctor to say he wouldn't have done anything to save the life of the woman who brought him into the universe. There is a sense of connectivity and cohesion there that you find in the best of the new era companions.

Doctor Who certainly has something very special in Pearl Mackie as Bill and her presence has elevated every episode she has been in. And when she is paired with the likes of Peter Capaldi and David Suchet, then it is easy to forgive Knock, Knock for its narrative wonkiness...