Doctor Who: The Guardians of Prophecy - Review 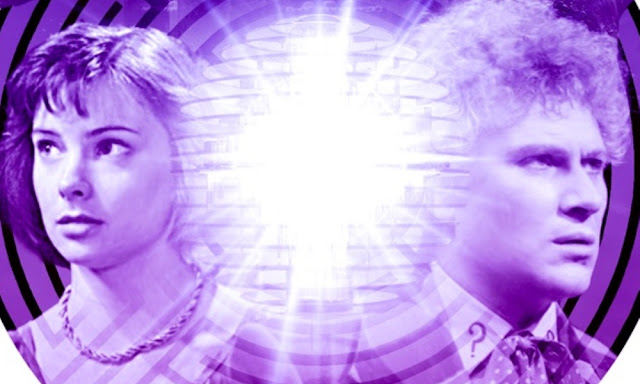 The Keeper of Traken is one of my favourite Doctor Who stories of all time. I really love the more sombre tone of series eighteen, the quieter performance from Tom Baker, Romana, K-9, Geoffrey Beevers. I like Nyssa and the fairy-tale feel to many of the stories in that particular series.

The Guardians of Prophecy was released in 2012 and was the first story in the fourth series of The Lost Stories. And it is a direct sequel to The Keeper of Traken. Obviously, no future stories could ever be set on Traken, so this story begins with the TARDIS straying towards a similar planet called Serenity, the only planet of the Traken Union to survive the devastation caused by the Master in Logopolis. Of course, beneath the surface, nothing is benign and serene as there is revolution afoot, with the members of Serenity's lower classes getting fed up with the Guardians, who interface with the computer which controls their world.

What you get with this story is a fairly basic tale about an invasion in an unjust society. The rebel characters, Mura and Auga, come across as some unsavoury characters in how they want to get rid of the union and it is into this uneven situation that the Doctor and Peri find themselves arriving in. And things get even worse when they find out that the evil Malador has returned to life. The Doctor and Peri find themselves having to bring together the warring factions to beat the real baddies.

Colin Baker and Nicola Bryant remain on top form as usual. Peri's relationship with Ebbko is a solid piece of storytelling and as usual, she is allowed to be intelligent and plot-important in a way that she never was in the television series. The Doctor also manages to get in on the action and gets some of the best one-liners. In fact, the story has some decent performances from all involved, easily stealing the show is Graham Cole as the safe-cracker, Ebbko and Simon Williams as the Guardian of Serenity. He manages to take a role which could have been dull and boring and gives it some real character.

The real problem with this story is its villain. Malador is an ancient evil. And that is it. There's no real way that the writer tries to make him a real character, he simply has a lot of powers and shouts a hell of a lot. Once he is unveiled, the story becomes immediately less interesting and it doesn't help that the Doctor defeats him an uninteresting way either. But luckily, the story never really sags, thanks to the excellent direction from Ken Bentley.

As a standalone story, The Guardians of Prophecy works well enough but as a sequel to The Keeper of Traken, it just doesn't compare. Maybe this is because Guardians never really feels like a sequel to Keeper. Keeper has a distinctive fairy-tale feel to it, Serenity just feels like your standard science-fiction planet. While it plays with some of the same ideas as Keeper but not adequately enough. There is some sort of goodness barrier that keeps evil off Serenity, but it is never made clear how that works when there is evil going on in the capital. It would have been interesting to see how corrupt the goodness of the Benign Union actually was, but nothing is ever made of it. And it was my understanding that the word Melkur was just the name of anything evil that was drawn to Traken, here it seems that the Melkur are actually an army, all identical to the original one AKA, The Master's TARDIS.

But perhaps the most disappointing thing about this story is that no mention is made of Traken. While there is the haunting 'Lament of the Melkur' at the beginning, all the Doctor says is that that part of his history is something he doesn't like to look back on. Serenity is arguably the last surviving part of one of the Doctor's worst defeats, something could really have been made of that...