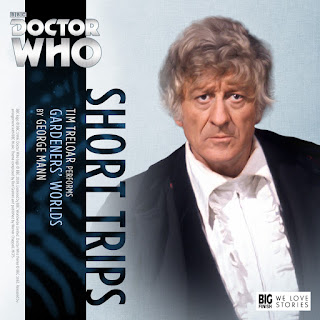 It appears that a sleepy English village has stepped into the Twilight Zone, but this is just something that the Third Doctor, Jo Grant and Mike Yates have to take in their stride as they uncover the strange goings on surrounding the village...

The story begins simply enough, with Jo having to push the Doctor out of his lab to catch his interest in a mystery, which might appear a little pedestrian for UNIT at first. One is forced to wonder if a secret conclave of wizards causing the unexplainable phenomena in Colston Burghley or is it the Master with TOMTIT again? No, this time, it turns out to be something even more bizarre.

The first thing that will strike you about this audio adventure is it that is very much a Third Doctor story. We've got the Third Doctor trundling out to the countryside in Bessie, talking to slightly bemused locals whose lives have suddenly become very odd, the Doctor hunting down clues until he discovers what is behind the problem and Jo and Mike trying to understand what the hell he is talking about. Jo, who has seen a lot more of the Doctor's life than Mike, has an easier time following him, something which I particularly liked, since many writers label Jo as a dumb blonde, something which she never was, naïve perhaps, but never dumb.

They all sound different and narrator, Tim Treloar does his usual good job of bringing each character, particularly the Doctor, from this era to life.

By the quick time the final third of this half-hour story rolls around, mere curiosities have become very deadly dangers and the stakes have been raised very high indeed. The technobabble science-stuff is easily on the same level as that from Inferno and The Time Monster and it runs over bits of canon history which would become very important later in the Third Doctor's life. But this story is full of interesting moments and ideas and it is a fun little story, something which you would expect for £2.99...