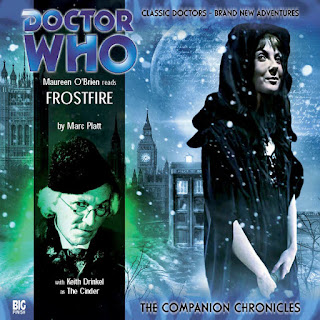 Frostfire had a difficult job to do. It was the title chosen to kick off the range of audiobooks called The Companion Chronicles, which was launched in 2007 and considering how long the original range ran for, it must have been successful. But was the story a success on its own? Well the answer is yes and no.

As with all The Companion Chronicles, Frostfire featured one of the Doctor's companions narrating an unseen tale with one other character. In this case we see Maureen O'Brien return as Vicki, a companion of William Hartnell's and Keith Drinkle as The Cinder.

Vicki left the Doctor and Steven in The Myth Makers and the story begins in Ancient Carthage 1164 BC, with Vicki telling a story to a prisoner about the time they visited Regency London in 1814 AD, the Last Frost Fair, (Yes, the same one The Twelfth Doctor and Bill recently visited), and their meeting of novelist, Jane Austin.

The story itself is pretty decent, something one expects when it comes from Marc Platt, it is the reasoning behind the story that I may have problem with.

Vicki's story concerns their coming across a strange egg on display at a local curiosity sideshow at the Frost Fair and they soon find themselves dealing with a creature called a Cinder, think of a Phoenix as a person, (Jean Grey if that helps!). This side of the story is interesting and not as boring as a few of the others could be. The Phoenix needs heat but with it, it could start a brand new ice age. It is a nice little reveal when we learn the person Vicki is talking too is The Cinder, someone she is keeping prisoner in the Temple of Astarte, giving him a small amount of food in order for him to keep her company. No one else in this time understands her.

And that is the problem with this story in the end, it is just Vicki trying to tell us that there is some regret there that she left the Doctor. But that is the fate of all companions isn't it, after seeing the universe in all its splendour, how can life on Earth ever compare to that...