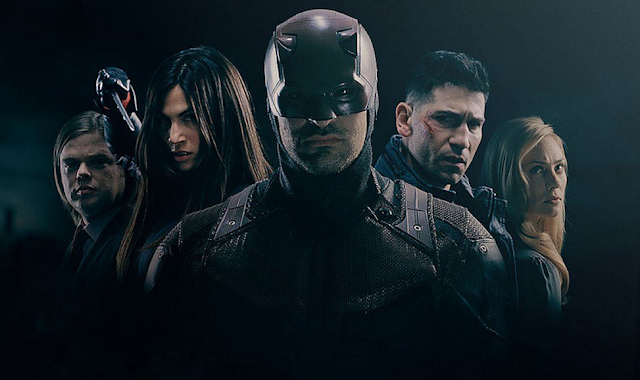 Back when I reviewed the first season of Daredevil, I spoke about the darker tone that this corner of the Marvel Universe had undertaken. I also devoted a lot of time to talking about the possible avenues this tone gave the Marvel Universe in terms of more mature themes, relationships and violence. I also mentioned that, at thirteen episodes, a television show allowed for more complicated and deeper villains than could be done on the big screen. A Marvel Movie would never have allowed for someone like Kingpin to be such a spectacular and standout character.

In this look at season 2 of Daredevil, I won't need to hark on about the darker tone because with Daredevil, Jessica Jones, Luke Cage and Iron Fist readily available on Netflix, we viewers already know the boundaries that are being pushed. Jessica Jones went above and beyond in its exploration of abuse and rape in a stunningly stark and frightening manner. I hope we can expect season 2 to have its eyes on a new topic and explore what that will do its characters. In Daredevil, gone is the big bad, Kingpin lasted for a whole season, now we get two baddies, designed to push Matt Murdock to his very limits in terms of his respect for human life. This was another big issue he himself battled with when he found himself debating to kill or not in the first season.

To take the same look at Murdock VS Life or no Life, is Jon Bernthal's Punisher. And Elodie Yung's, Elektra. One killer is connected to Murdock's vigilante life and the other to his life as a blind lawyer. And both characters test him in very different ways. And both are excellently portrayed on screen by actors more than ready to take them on their own emotional arcs and journeys. Like Kingpin, Punisher and Elektra aren't just foils, neither are they thematic devices. They get to be real characters. And great characters at that too.

This brings me to one of my favourite things about Daredevil, aside from its amazing choreography, something which is still in play and even tops that seen in the first season on occasion! However, when you binge watch several episodes in one go, all the fights can blur together, so there are four of five main, standout fights from the second season.

But my favourite thing about Daredevil, is its characters. That is something great to say, so many shows don't take care of its characters or give them anything interesting to do. Daredevil doesn't do that, it could easily be a series which took a rest on its fight sequences and just focused on its characters.

While I didn't do this - there were a few moments here and there where one wouldn't be blamed for fast-forwarding through. Once you've seen Daredevil and Elektra fight ninjas half-a-dozen-times, you risk a loss of interest. But this is picked up by the supporting characters! I love Foggy and I love Karen. Even smaller scenes with Sgt. Mahoney are brilliant, I could, quite cheerfully, watch scenes just involving their lives, scenes which don't concern Matt Murdock. And that is a factor which may be more unique to the Marvel Cinematic Universe than even the darker tone.

The story structure of this season also works in the show's favour, particularly as a follow up to the first season. You really don't a repeat of the almost quasi-videogame format of the Kingpin season. That was the perfect blueprint to a first season. But season 2 is very different. It is mainly because the main villain isn't introduced until the final few episodes and the story never feels like it is leading up to the final battle. It feels like it is about everyone. It is about Matt Murdock, Foggy Nelson, Karen Page, Claire Temple, The Punisher and Elektra Natchios and the places they end up in the final moments.

You could almost break this season up into little arcs if you wanted, with the most notable being the first four concerning the introduction of the Punisher, which contain an absolutely brilliant performance from Jon Berthnal. Then, when the dust from that fight finally settles, the season adds Elektra into the mix and an actual courtroom trial, something which we should have been given in the first season given how Nelson and Murdock are actually lawyers!

As the season winds down, things from the first season begin to come into play, something I particularly loved because I love piecing continuity together! I certainly don't want one season to close itself off from whatever happened in the previous one. Things should be expanded on and continue to move the ongoing story forward, dead friends should continue to be remembered, old villains should continue to resurface and loose plot threads should definitely be addressed.

Season 2 of Daredevil excels at both the action and narrative sides of things, giving us a much more complex and layered story than the first one did. This season was devoted to exploring Matt's ideas about the sanctity of life and the possibility of true redemption. This season does away with the main season villain and gives us some fantastic performances instead not only from the main cast but the guest cast and especially Berthnal and Yung. Daredevil continues to be amazing and promises even better stuff to come, not only from season 3 but also, The Defenders...