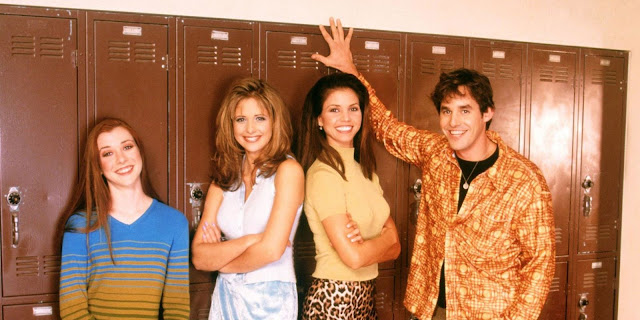 What is the purpose of a pilot episode?

The first person we meet is an innocent looking blonde who is not what she appears to be. Something which would prove to be a theme as the series went on. But actually, Darla biting her victim in the near darkness gives us a startling contrast to the bright lights of Sunnydale daylight hours, palm trees, rock music and witty dialogue.

As a matter of fact, the dialogue is really witty and the characterisations are deft. Buffy will strike you right off the bat by preferring to be friends with school underdogs like Willow and Xander, while pushing Cordelia aside. We learn about Buffy's checkered past through a conversation with Principle Flutie. It is hilarious to see him ripping her transcript up and then carefully taping it all back together again! And Buffy's mother has no idea about her daughter's out of school activities. Fate seems to have lead Buffy and her mother to the Hellmouth as Buffy quickly meets her new watcher, Giles, played by a young looking Anthony Head.

It was interesting to see Buffy's new friends learning the truth about her in the opening episode, with Xander learning about his friend by eavesdropping in the library and Willow after nearly being attacked by a vampire who she meets at the local high-school hangout, The Bronze.

And we see Buffy stalked by a dark stranger who hides in the shadows. We learn this is Angel, though we don't know his name at this point. But he isn't the Angel that fans love at this point. Actor, David Boreanaz delivers his lines awkwardly and his clothes look far too fancy. But he is certainly 'the gorgeous guy in an annoying way' character type. At this stage we only get some subtle hints that he might be a vampire with him giving Buffy a box with a cross inside so he doesn't have to touch it and tells her not to worry, he doesn't bite...