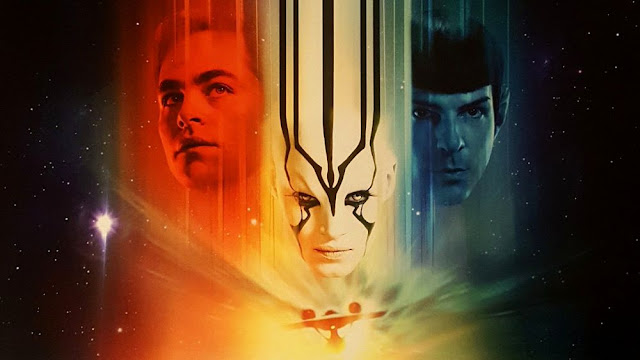 The movie opens with the line, "Things are starting to feel a little episodic." The line comes from the musings of Captain James T. Kirk, as he is surveying his life aboard the Enterprise. It works brilliantly in setting up how self aware, director Justin Li's, Star Trek Beyond actually is. Spending every day wearing the same clothes from the same wardrobe, having the same coffee in the same mug, sitting on the same chair in the same bridge. Kirk wonders this as the mystery of interstellar space races past at warp speed. Co-written by Simon Pegg, Beyond goes where many Star Trek stories have gone before, answering a distress call which leads to another mission against a bad guy with another shady past. Star Trek's ideal format has always been on television, that kind of medium allows for its characters to get some proper development. It is a shame then that the new cast of the big screen Enterprise don't have the time to do the same thing - which is why they can rely on each other - opines Beyond.

Bringing with him some of the physics-defying action with him hot off his time on Fast and Furious, Justin Li incorporates a motorcycle chase in space into the action as the Enterprise is set upon by an unrecognisable Idris Alba in the form of Krall, whose drone army attacks the ship and breaks it into pieces. The basic outline of the plot to Beyond, from Pegg with meaning from Edgar Wright is about friendship in the face of Armageddon. Bored stiff with their five year mission, the crew can think of nothing but leaving the ship, until it is snatched away in an instant and separated into pairs, they venture from their escape pods to have to start over in a century-old Starfleet ship, which was ditched on the surface of an unknown planet, they manage to save the day, only to get back to where they started albeit with a new sense of purpose.

The drone attack, in which the very familiar corridors of the Enterprise become twisted and broken as the camera weaves in and out of the carnage, gives the movie its most striking moment. Kirk, his face reflected in the glass of his escape pod, can do nothing but watch as his ship is destroyed and the wreckage crashes down on the surface of the planet below. From that moment onwards, the crew of the Enterprise have to rely on each other, their dwindling supplies and a can-do attitude and also on their limited and intractable personas: Kirk - the one who punches things, Spock - who is very serious, Uhura - the one with the patience of a saint, Chekov - who is always yelling, Bones - who always gets the best jokes, Sulu, the one who never gets anything to do but seems cool anyway and Scotty - the one who is Scottish.

There is little doubt that the best villains in Star Trek are the ones who reflect the crew of the Enterprise, or Voyager, or Deep Space Nine. Look at the collectivist Borg or the totalitarian Romulans, for example. And looking at the movie from that regard, Krall has all the makings of the perfect villain, though any further explanation on why would ruin the surprise. But his motivations only get a cursory explanation and while it might be a move in the right direction, unlike its predecessor, Into Darkness, Beyond propels Star Trek towards being a franchise without any ideas.

But with Justin Li's direction pushing the crew to become more of a family unit, this movie does bounce along, hurtling our heroes over flaming wreckage and into currents of artificial gravity, pausing just long enough to deliver a punchline or a knowing nod and wink...