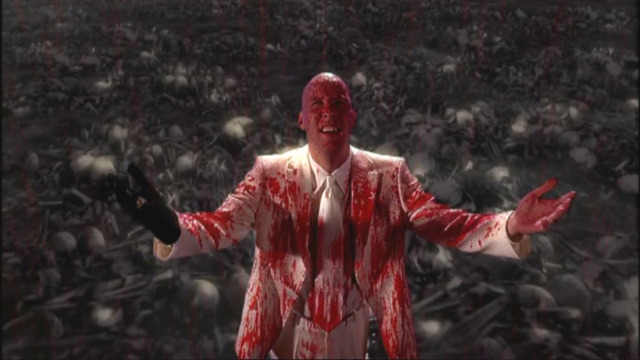 This is the second greatest episode of Smallville. It was very cool with the Greek Tragedy overtones about the future. Especially when it concerned Lex's future.

The scene with the vision of Lex which killed Cassandra was nothing short of stunning. Lex standing in a field of sunflowers which becomes a field of bones, wearing a white suit and black gloves. We see the presidential seal and then blood rains down on him. And he smiles the whole way through it. It is one of the most striking moments that Smallville ever produced and one of the most striking images to come from the Superman mythos.

Clark's vision of the future also included death, he stands in the middle of gravestones which belong to everyone he has ever loved - excluding Lex. It is interesting that although Clark is a hero, his arrival caused many deaths and he has also inadvertently caused many more through the deaths caused by those effected by the meteor rock.

And the storyline with Smallville's first serial killer is an interesting one, I really like the part where he goes to stab Clark but the knife just breaks apart. It is a good moment and while the special effects do look dated today, it is one of Smallville's earliest shock moments.

Perhaps the most interesting thing that this episode gives us to consider is that when Clark saved Lex from drowning, he saved someone who will almost certainly go on to cause innumerable deaths in the future...