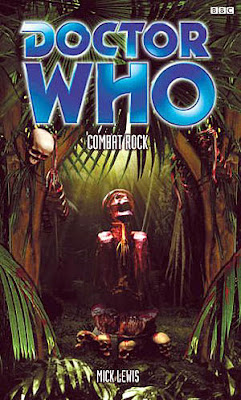 Of all the books to be given to the Second Doctor, who was portrayed by Patrick Troughton from 1966-69, Combat Rock manages to be the closest printed word ever got to correctly portraying this incarnation of the Doctor. You can really hear Troughton saying the lines, hopping around, crying out in horror and acting with embarrassment at different occasions. The concern he has for his companion, Victoria, never feels so real. The Doctor's face was so often lined with concern about a life beyond strange. His eyes were dark, benevolent and childlike - sometimes all at the same time. Whenever this incarnation of the Doctor wanted to explore, it often led to lots of trouble. But was the Doctor really as simple as he wanted people to think? There is something about him that really generates respect. The Doctor briefly wonders if this jungle is his purgatory, a place where he is going to be forced to come face to face with his sins. The climax of the novel sees the Doctor bravely facing down the mysterious Krallik, running circles around him in a way that only the Second Doctor could have done. Jungles and the unknown have always held a fascination for him. And it is the trouble that this fascination brings, which this book decides to explore.

Another example of great characterisation comes from Frazer Hine's, Jamie. His charm and wit leaps from each page. And it would appear that, spurred on by Victoria's beauty, Jamie is hornier than ever! But he only loves her like he would love a sister. There is a great sequence, told to us through the eyes of the highlander, which sees him bravely trying to hold his own in the mad world surrounding him. Much of the book's humour comes from Jamie too. Feeling helpless is the feeling that Jamie hates the most, he was always a man of action, ready to leap to the defence of his friends.

And this is another fabulous book for Victoria, someone who wasn't served well on the television. Both novels, Heart of TARDIS and Combat Rock, portrayed her in a strong way and this novel uses her character background particularly well, enriching the tales by giving us her own unique perspective on the adventures. There was no way that Victoria could help her straight-laced upbringing and that she has been through a hell of a lot. Her father told her that she had a tendency to welcome people or things which were strange or out of the ordinary. You really get the sense that Victoria is ashamed of her closeted, imperialist upbringing. Prejudices and beliefs are hard to shake if they have been drummed into you since childhood, even if her first major step to shaking those off was by entering the TARDIS. But she had never been one to adhere to what was normal in the first place. Victoria has never been sensible and she can be relied upon to get herself into a mess. Victoria certainly thinks of the bickering her friends do in an affectionate way, Jamie is headstrong while the Doctor is daunted by the events surrounding him. But she can see straight through the shallow view of colonialism, the characters in this book have. One really does have to wonder what her father would think about her new beliefs. Would he secretly approve?

Rather shockingly and sickeningly, the book opens with a child being shot through the head and then a group of tourists being killed by snakes leaping from the mouth of a Mumi and being slaughtered to the point where there is little of them left. This is only a little peek at things which are to come though. The Kill Crew - made up of Pan, Pretty Boy, Saw, Grave and Clown are all thoroughly hateable. The Doctor and company are quickly thrown into the action by being captured near the beginning of the novel and the scene with a river of bobbing decapitated heads is really horrible to imagine. It is nicely juxtaposed by a passage with Victoria and Agus walking along a beach where they can both look at the wreckage from a recent war. Amongst the rest of the bloodthirsty pages, this scene is haunting and beautiful at the same time. Talking of bloodthirsty, author Mick Lewis doesn't shy away from showing us cannibalism. More than three characters eat fellow people, Father Pieter is forced to eat the grey matter from his old friends' head. Baccha and his wife smash open the skull of a trader and scoop out his brains before devouring them. And a group of cannibals roast Ussman on a spit while cutting off slices of his stomach to chow down on. Hardly any of the supporting characters in this novel get happy endings, most of them end up dead. Pleasingly, with the exception of Clown, all The Kill Crew get despatched in suitably violent endings. Clown survives to satisfyingly kill the evil president of the planet at the very end of the novel.

At first glance this is perhaps a shocking piece of Doctor Who fiction. I really didn't think I would enjoy this book, Rags, also by Mick Lewis, isn't an acclaimed novel but this really is a horror novel which manages to scare you, which is a rare treat indeed. It is also very intelligently written, with some brilliant world building and has some complex things to say about colonialism. The book literally sweats with atmosphere thanks to Lewis's particularly bloodthirsty way of writing and he somehow manages to make writing about death into an art form. While the plotting can sometimes appear to be a little loose, the climax of this book pays off thanks to some cleverly planning and planting of clues throughout the pages of the novel. This is easily the sickest Doctor Who novel ever written. Where Rags dealt with people being forced to do horrible things, Combat Rock deals with people who are genuinely sick and passionate about killing others.

But even more disturbingly, amongst all the blood, guts and gore, The Second Doctor, Jamie and Victoria get to shine like never before...