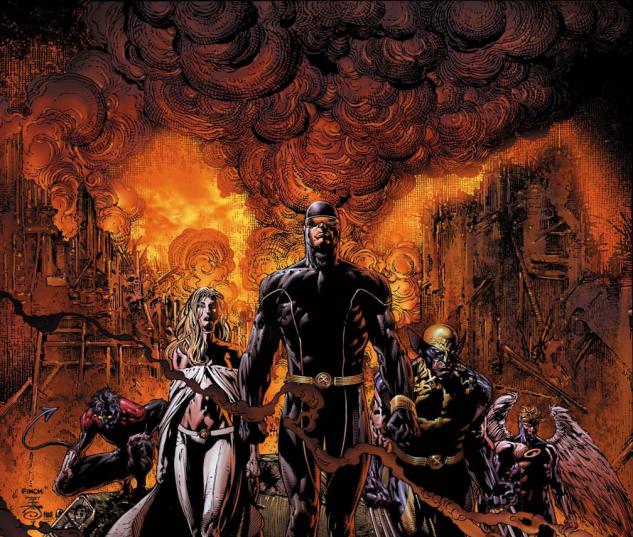 It only took three little words for Wanda Maximoff to reduce the Earth's population of mutants to 198. "No More Mutants,", with these words, the mutant race became an endangered species. After a year there comes a new birth and a new mutant is born...

Author, Ed Brubaker kicks Messiah Complex off with a rather grisly start. We pick up with the X-Men, made up of Cyclops, Emma Frost, Wolverine, Angel and Nightcrawler, on their way to Cooperstown in Alaska, which has become under assault from two opposing forces, a group of mutants called The Marauders and the anti-mutant extremists - The Purifiers. Both sides are hunting for the new-born child. And the town has been razed to the ground. And every child has been murdered, in case they are the new mutant. When they arrive, it doesn't take the X-Men long to learn of the child's abduction and soon, the race is on to what could be potentially the most important mutant on the planet.

There are some mutants who believe this child to be something of a messiah while others believe the child to be a harbinger of doom. There are also multiple factors competing with each other for control of the child and the control of the future. Things are made more difficult when the hunt begins to span time as well as space, with the X-Men's search taking them from Alaska to Canada to Texas and then Scotland. And a team is dispatched to two separate time zones, in a vain hope that they can discover the identity of the kidnappers and why the child is so important.

This graphic novel collects all 13 issues that made up Messiah Complex, spanning across titles including, Uncanny X-Men, X-men (Vol2), X-Factor, New X-Men and the Messiah Complex One-Shot. The story was easily the biggest X-Men crossover event since the 1990s and this is possibly the reason why so many X-Men fans love it so much, it harkens back to a time when large crossover events like this were an annual feature.

What Messiah Complex really does is looks at the real glory days of the X-Men franchise and the brilliant stories which were being written at the time like Age of Apocalypse, Executioners Song and Fatal Attractions. Then it built upon the events from House of M but luckily Marvel managed to pull it off.

The narrative is really fast paced and rarely lets up, this is thanks to a massive sense of urgency which is built up on characters and villains being pitted together for the sake of the child. One thing which usually lets this type of story down is that each title included as a different author. Usually it is a case of the right hand doesn't know what the left is doing. But not here. Here each author works brilliantly with each other and really brings the story to life. There are great some twists and turns which you won't see coming until they arrive. It really is an epic chase story, full of plenty of action and danger to keep any fan interested, not an easy task when you consider how many characters are involved.

Largely the art is top-notch, the action scenes, (there are more than a few), are done very well. Some may be more chaotic than others but that is something to expect and thankfully, they are all easy enough to follow. Marc Silvestri's art in the opening chapter is nothing short of beautiful and Billy Tan also does some great work in the Uncanny chapters. If I had one niggle it is that the art from Humberto Ramos, working on the New X-Men title, looks a little too cartoony compared to the rest of the book, but it doesn't really upset the reading, it just makes the overall book look a little uneven. But that is only a minor quibble and you probably won't even notice it as you are propelled through the story.

This is an epic book which is only a small part of an even more epic plot. And while it builds on what had already been set up, it is a story which stands well enough on its own. But it also sets up beautifully what comes next. At the end of the book, Professor X is supposedly dead and the X-Men are no more. Their home in Westchester has been destroyed and they have nowhere to turn. With this book kicking their new story off, the X-Men's struggles would only continue in Messiah War and Second Coming. And it is a good thing those books are available as people will no doubt want to know what happens.

Messiah Complex has a special place in my heart. Before this novel, I only ever really read Fantastic Four. But Messiah Complex, while I didn't read it at the time, it compelled me to pick the issues up that now consist in the Divided We Stand book. This is my favourite era of the X-Men and it firmly put me in the middle of the Marvel Universe and for that, I will always be grateful. So to the men and women who worked on this book, no matter how big or small their contributions were, I really thank you...