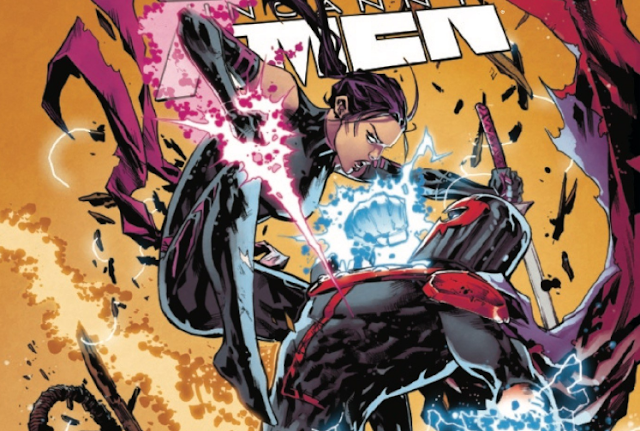 Uncanny X-Men #19, follows up from the events of Inhumans VS X-Men and the story which took place in this comics' pages up to the previous issue. It now appears that the X-Men have spread and divided and it really does appear that Magneto has achieved his old goal, the destruction of the X-Men. The problem is that he now has Psylocke on his trail and she isn't happy. The issue focuses on nothing but Psylocke and Magneto from start to finish but writer, Cullen Bunn and artist Edgar Salazar with colour artist, Ulises Arreola, make the most of the page count, even down to each minute little detail on the cover.

The issue begins with Psylocke running off to what looks like is going to be a confrontation with Magneto, while she is reminding herself of all the reasons he needs to die. But Psylocke seems more angry with herself for allowing herself to slightly believe in Magneto, or rather his cause. This narrative makes for some really interesting reading in the opening pages and panels and it also makes it more dramatic as the build feels slow and climatic. I also think it was nice that there is reference to what has made Psylocke head down this path - in this case, the reveal that Emma Frost and Magneto had planned to murder all of the Inhumans. And in those opening pages we get two things which help this storyline to make sense, motive and rationality.

The story feels like something of a slow climb to the dramatic ending but this isn't a bad thing, it actually made the story more captivating, something which it needed to be given its limited page count. Any comic which begins with a character hunting down another propels the reader into the story. And from the writing of Cullen Bunn, we knew Psylocke was on a personal mission - to kill Magneto. When you compare this with any other book or X-Men book, this issue really does stand on its own two feet. 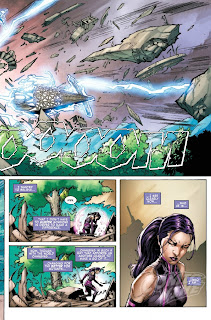 There are times where you can read as many comic books as you want and never know how intense or engaged the characters will be when they eventually meet. But here, we know what we are getting from the beginning, a showdown between Psylocke and Magneto. You can feel her anger towards the man and you can understand why she wants to destroy him. And that feeling is reinforced when she reminds him why his X-Men are no more. And then we get panels showing us what Mystique, Monet, Sabretooth, Xorn, Archangel and Fantomex are all up too. They've all left the team and they were driven away by one man: Magneto.

What is really intriguing about this issue was how remorseful Magneto seemed to be despite him being prepared for Psylocke's attack. But she wins by taking him down with a telepathic sword and Magneto seems to agree with her on her grounds for his execution. To put in her words, Magneto was a poison for this team, he wanted them to be the Hellfire Club, X-Force, even the Brotherhood of Evil Mutants. He didn't want them to be X-Men. It is definitely one of the most engaging fight sequences that anyone will have the pleasure of reading for some time and when you break the pages down to their emotional context, then I'm sure you'll agree. To have someone you trust hurt you and affect the lives of those around you based on their actions, is a very powerful way to tell a story.

As for the artwork in this book, the colours of this issue are sharp and vibrant yet darker and softer when they need to be. I'm glad this was made sure to be done as it allowed for the needed contrast in this issue. Never do you want to take away from the primary figures and the action and having trees and rubble surrounding either Magneto or Psylocke would never have made sense. Here, the artwork is practically flawless and got me excited about this single issue from the get-go. First impressions can mean everything when picking out which books to purchase, so it is very important that the artwork is appealing. Just from the cover, I could tell that this issue was going to be emotionally charged and action packed, and again, all this was conveyed just from a first glance at the cover.

So while Uncanny X-Men #19 doesn't result in any shocking deaths or revelations, it does what every comic should do, it tells a cracking good story. At the end of the issue I was left wanting more, while I was left satisfied about what I had just read and what is yet to come. With plenty of emotion, action, engaging characters and a backstory which actually made sense, there isn't really anything else left out that one would want from an X-Men book. This was a truly solid issue from start to finish...