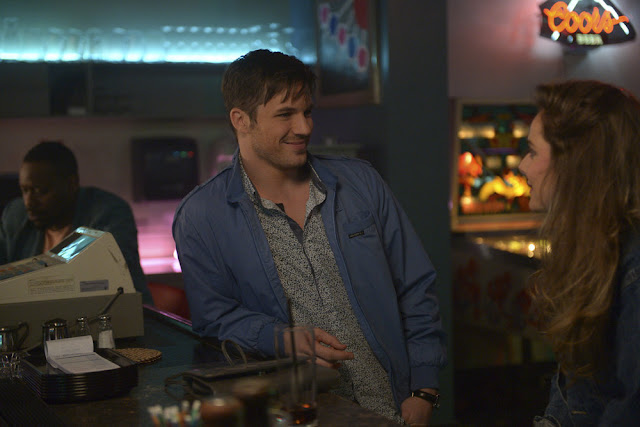 Following on from the previous episode, Wyatt has convinced Rufus to help him steal the Lifeboat and travel back in time in an attempt to prevent his wife from dying. To do this, he intends to stop his wife's killer's parents from having met. Forced to cover for them both in the present, Lucy is forced into an uncomfortable position when Agent Christopher discovers the ship is missing and Anthony Bruhl makes an alarming confession, something which could affect everything.

This episode is a real departure from the previous episodes in terms of its historical content. Rather than seeing the team trying to stop the assassination of some historical figure, this episode shows things getting personal for the team. And as Lucy points out to Agent Christopher, I'm surprised it hadn't happened before now.

Wyatt and Rufus have gone back to 1983 in order to prevent a random hookup between an air-stewardess and a bar tender, something which would lead to the birth of the individual who supposedly killed Wyatt's wife.

This episode is also significant for the murder of Anthony Bruhl, who attempts to destroy Flynn's ship after telling Lucy to get Rufus to do the same to theirs. Bruhl feels that the time travelling is only speeding up Rittenhouse's agenda and not slowing it down. It should be interesting to see where that narrative thread leads.

We also see Lucy reunite with her father at the end of the episode. Her father is a head in Rittenhouse and she is told that she is as Rittenhouse as he is. This makes sense, given that according her future diary, Lucy will one day end up working with Flynn against Rittenhouse.

But I have to say, that I wasn't really blown away by this episode as much as I have been with previous ones. We do get some nice 80s, nostalgia moments, such as an episode of the A-Team being shown and Rufus being geeky enough to know the episode number. And we also get a glimpse at a show called Manimal, which probably had some sort of influence on the creators of this particular show.

But really, all this episode served to be a giant information mine. One that wasn't really necessary in one big go...