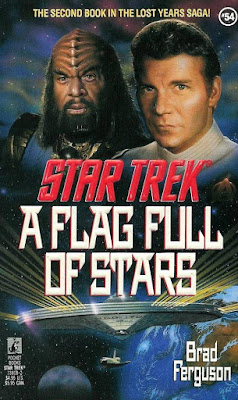 A Flag Full of Stars, picks up eighteen months after the crew of the Enterprise finished their original five year mission. Her legendary crew have now separated, taking on separate and in some cases, different assignments, that span the galaxy.

For Admiral James T. Kirk, he has found himself as the new chief of Starfleet Operations. He is now married and can only oversee the refit of his beloved ship, not actually captain it. The Enterprise is now captained by William Decker and Kirk finds that his only tie to his original crew comes in the form of his chief of staff, a young lieutenant commander, named Kevin Riley. It doesn't take Kirk long to meet a Klingon scientist living a peaceful life on Earth called G'dath, who is on the brink of creating an object which will be one the greatest discoveries in the galaxy. G'dath's invention could mean tremendous strides for the Federation. But in the wrong hands it could bring dire consequences to the entire universe...

And when Klingons turn up, attempting to steal the new technology, Kirk and Riley find themselves thrust into a position where they are the only two people who can save the Federation and the cosmos...

This book is the second in a series of novels called The Lost Years and actually picks up a few months after the conclusion of the previous story. What the creators had meant by The Lost Years was a series of stories which took place between the conclusion of the Original Series and The Motion Picture. It is an interesting thing to do and well worth taking a look at but sadly, these books mire the timeline when you look too hard at them, they fall apart when the two timelines meld together, something that stops these books from really being meaningful. The idea and the intention is a good one but this story is lacklustre and limps along till the book finally ends.

The main character of the book is Kirk. And only Kirk. Scotty, Uhura and Sulu turn up for a few pages and that is it. Spock, McCoy and Chekov don't even feature in these pages, like literally, they are no where to be found! They weren't even brought up in conversation, it is very weird the way they are just left out of the proceedings. Make no mistake, this isn't a bad book. It is just one which is there and is sadly forgettable. What characters there are in the story are handled nicely and to the point, with no fiddling about and there is a good Star Trek knowledge which runs through this pages. The problem with this book is the plot, something which only really needed a little more work...