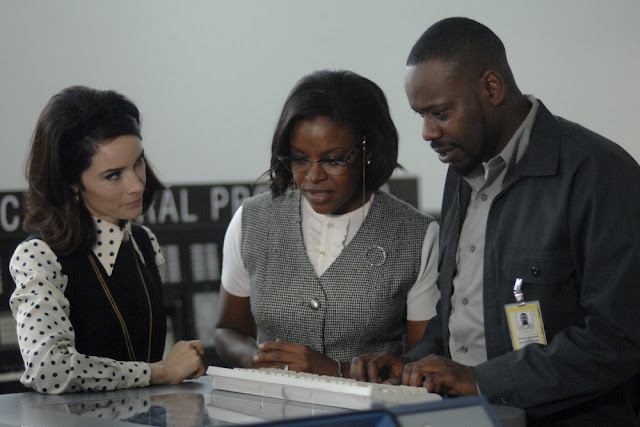 In this episode, Timeless goes back to one of the most interesting moments in history. The moment when humanity walked on the moon. Sadly, this is a moment in history which is nowadays overlooked, but the footage is fascinating, man literally walks amongst the stars.

The story sees Flynn and his team going back in time to throw a spanner in the works at NASA, using a modern computer virus on decades old computers. And it is a clever plan, especially given that there was no such thing as computer viruses in those days.

To put things back on track, Lucy and Rufus must enlist the aid of advanced mathematician and scientist, Katherine Johnson, who played a massive part in saving the lives of those during the earlier Apollo 13 mission, though she has never been mentioned in books or movies. Which is a shame, history owes just as much to her as it does to Neil Armstrong. Of course, she is reluctant to give aid at first, but once she sees that Rufus and Lucy aren't communist spies, she warms up to the pair.

Wyatt meanwhile, is on the task of hunting down Flynn, who has taken serious interest in a young woman and her son Gabriel. Once Wyatt eventually catches up with Flynn, he witnesses him saving Gabriel's life. It later transpires that Gabriel was supposed to die from anaphylactic shock, after being stung by a bee.

This was a slower episode than usual, but Timeless needed this change of pace. It was still a great episode and a fantastic tribute to those who have made touching the stars possible. The sixties saw the human race reach the moon and the 1980s saw the first space shuttles come along. The world was watching when the Challenger exploded and the world mourned for those who died, those who had the courage to boldly go.

And while this episode probably didn't quite capture the excitement at the time, it really did highlight those who history seem to have forgotten, namely Katherine Johnson.

So, here's to Katherine Johnson, someone who played a part in allowing us to boldly go where no man has gone before...