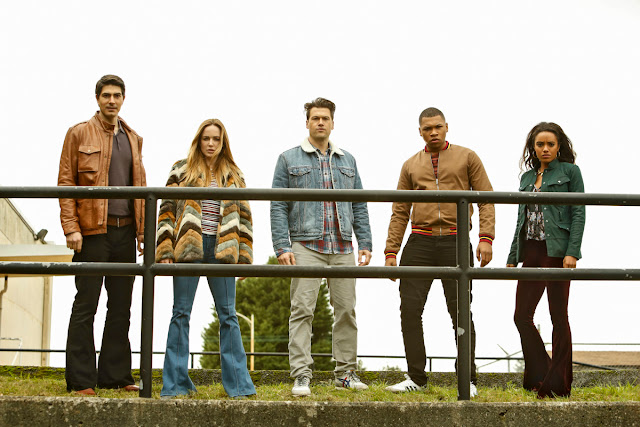 Returning to our screens after it's mid-season break, it was nice that Legends began again with something of a more traditional caper. It was a really fun piece with the inclusion of George Lucas, working as a props man for Arthur Darvill's amateur film maker.

Learning that the Legion of Doom are after something called the Spear of Destiny, the Legends must try to find it and rescue Rip Hunter from the clutches of the Legion. The problem is that they all manage to cause an aberration where Lucas never becomes a film director, affecting members of their team because they were never inspired to become the people they are now. Ray never sees Star Wars and never builds his technology and ATOM suit and Nate never sees Raiders of the Lost Ark and never becomes an historian.

Everyone involved clearly had a ball producing this episode, Arthur Darvill stands out as a trainee film director and it will be a lot of fun seeing how he will eventually get his memories back, once he and the Legends properly reunite.

Matt Angel certainly looks like he is having fun playing George Lucas and there are more than a few nice little nods to Indiana Jones and Star Wars littered throughout the script. The scene with the trash compactor is clearly referenced, as is Vixen's speech about Lucas being their only hope.

The story threads nicely in with some scenes between Mick and Professor Stein. Mick informs Stein that he has been seeing visions of Captain Cold around the ship. This eventually leads Stein to perform brain surgery on Mick and a couple of funny scenes afterwards.

Neil McDonough and John Barrowman make a brilliant double act as Damien Darhk and Malcom Merlyn. In fact, there was one brief moment where the pair are in a lift about to apprehend Rip in a police station, had one been wearing an afro and the pair in leather, it would have been lifted straight from Pulp Fiction!

This was brilliant way to bring back the Legends, I'm keeping my fingers crossed that this level of brilliance manages to continue...