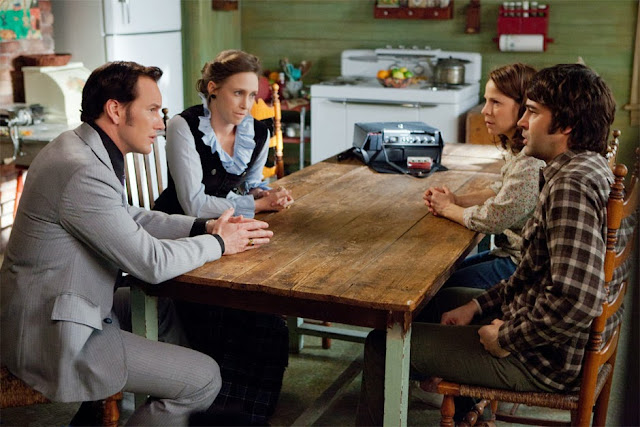 For many cinema fans, James Wan came out of nowhere. He had created Saw and Dead Silence but that was all he really did. And let's face it, neither were really what you would call massive successes. Then came along Insidious, a story that mixed The Poltergeist with The Amityville Horror. And now, even Insidious pales in comparison with the two The Conjuring movies. The Conjuring is a shudder-inducing haunted house movie based on what is believed to be a 'true-story'. Of course, what you consider to be true is, ultimately, up to you. But this is still a cracking film. When it was announced it was believed that this movie would receive an R rating. Not for sex, drugs and rock and roll but for how, knuckle-whiteningly scary it is. Even the production company who made it, Warner Brothers, hired priests to hand out holy water at the screenings. Now, it is nowhere near that scary but it is still pretty unnerving.

Taking place in the early 1970s, Wan recreates the look and feel of the era effortlessly, paying attention to detail and gives it a heavy sepia tone. The film delves into the casefiles from real life demonologists, Ed and Lorraine Warren, whose claim to fame was the Amityville Horror. Ed and Lorraine are played wonderfully by Patrick Wilson and Vera Farmiga and the pair are introduced thanks to an on-the-case, prologue. Wan gets points for beginning the film with the audience staring into the eyes of a particularly creepy doll. And following the rather portentous title card, which really helps the audience to understand that this is this generations answer to The Exorcist, the focus of the movie shifts onto Ron Livingston and Liv Taylor, playing a married couple who move their family to a farm house in Rhode Island. While the subsequent paranormal happenings, slamming doors, knocking, rearranged belongings and limb pulling isn't anything we haven't seen before, Wan manages to stage them in such a way that they are seriously scary. In one of the early scenes, he uses a one-shot to play on the viewers' perception of space and he refuses to show us the bedrooms, opting instead to allow the camera to linger on a preteen looking up, allowing the audience to decide for themselves what is up there.

But neither the film or the director seems content to just scare the hell out of the audience, it also fancies itself as a biopic, one that shows us how and why the Warrens work, but it is that which can sometimes set the film back, working against rather than for, the movie as a whole. Once the pair of ghostbusters enter the scene and bring their own clinical detachment to the proceedings. And despite the writer's attempts to give the Warrens a thematic arc, one which is based on the belief that God brought them together for a reason, Wilson and Farmiga end up feeling like dramatic distractions. This leaves us to believe that the real star of this film isn't on screen, but the man behind the camera. Toying with what we do see on screen and what we don't, Wan really manages to shake of his Saw origins. And that really is an exorcism...