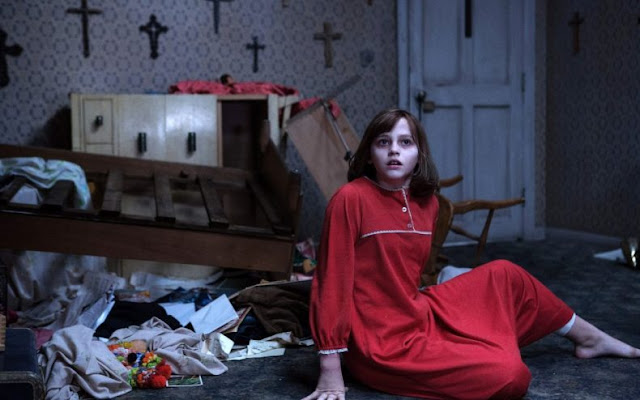 Is The Conjuring 2 scary? Is it jump out of your seat, wet your pants scary? Well, the short is yes, to the first point. After all, any scary movie under the direction of James Wan is genuinely creepy, even when they are packed with all the haunted house clichés in existence and trust me, this movie uses them all. But thanks to Wan, those clichés are genuinely terrifying. The movie doesn't really even rely on jump scares either, there are a few but for once, they work. But what the movie does superbly is that it taps into the universal, childhood fear of the dark, with scenes of a little girl hiding under the bed covers with a torch, ending up as some of the most effective scenes, helped along the way by the excellent musical score and gloomy cinematography by Don Burgess.

And the clichés this movie employs is where the 'Based on a True Story', bit comes in. Almost the entirety of the main plot revolves around the real-life incident concerning the Enfield Poltergeist. It was an extremely well documented case of a supposed ghost infesting the home of the Hodgson family from North London in 1977-79. The ghost was apparently a fan of the old ghost clichés, banging on walls, shaking beds, moving the furniture and possessing children's toys. And as these malevolent ghosts usually do, it singled out one child, in the case, Janet Hodgson, played brilliantly in this movie by Madison Wolfe. People called the happenings many things, collective delusions, a desperate attempt for attention from a disturbed child, or as this movie would have you believe, it makes it pretty explicit that the Devil himself has taken up residence there.

Thanks to this instalment of The Conjuring franchise, it is possible that these movies have overtaken The Exorcist in terms of the most Christian horror movie ever made. It shows the Catholic Church as a spiritual shield and Ed and Loraine Warren, played by Patrick Wilson and Vera Farmiga as their best holy agents. For a movie set in Enfield, London, I found it a little odd that the movie would begin with the Warren's investigating Amityville. But it all becomes clear as it is during this investigation that Loraine becomes aware and encounters a demonic presence that continues to haunt her for the next few years. Fearing for the life of her husband, Loraine begs Ed to stop investigating ghosts for a while, he reluctantly agrees. But then a priest arrives with their next case - they have to travel to London and confirm that there is something going on at the Enfield home.

It was a joy to see that both Wilson and Farmiga were given their own moments to shine in some of the spookier set pieces. Farmiga gets her moment early on and Wilson has to wait till the end but they both get moments to really give us wonderful performances. And while they are both convincing in warrior mode, the movie falters when Wan tries to play up the romance between the pair. From the first movie, and for people interested in the paranormal as a whole, we know that Ed and Loraine are married, but when he has them both telling the story of how the paranormal allowed them to meet, it doesn't quite work. And then there are Ed's comments on the odd sleeping arrangements for them, it seems off. And this might be because they were flirting in front off a possessed, pre-teenage girl whose soul is in the process of being handed over to devil, but it a niggle that I just couldn't shake, no matter how damn good the movie was.

In fact, all the non horror moments are where this movie stumbles. The score is really effective in the scary moments but it makes you roll your eyes when things start to get sentimental. This really comes to ahead in a scene filled with unintentional comedy where the 70s setting, collides with demonic imagery in a really silly way. I also didn't like that the 70s setting was downplayed, couldn't the family have watched television programmes like Are You Being Served? and Doctor Who? Why not pick well known shows like those and some obscure rubbish that you wouldn't find a child watching, ever! But I loved the picture of Joanna Lumley as Purdy from The New Avengers on the wall in the girl's bedroom as I am a massive fan of that show! But, slightly silly moments aside, there are great funny moments here, one that sticks out in my mind is a moment where the family are fleeing from their home after a nearly deadly attack with someone shouting, "Why don't they just move!"

(And for you smart-pant people, the Hodgson family lived in a council house. The councils in England are very sceptical when it comes to the paranormal and a move has to be justified to them.)

The Conjuring 2 is more than two-hours long and this really allows for some escalation. Even though each scary scene and jump can turn your knuckles white, the film does gradually start to loose its momentum towards the end. It is because of this that the final confrontation comes as a bit of a relief, rather than the fight-to-the-death moment it is played as. But the long running time really allows Wan to play around with the demonology involved in this film. The main villain is a demonic nun, who is scary enough but oddly reminiscent of the 'bride in black', from his earlier Insidious movies. And then there is the inclusion of 'The Crooked Man', who the demon forms himself into to spread terror for a moments. It is like the demon had watched The Babadook or something! This is explained by the demon taking on a form that the family would recognise. And that point would be fine, had the ghost not already taken on two forms known to the Hodgson family.

So The Conjuring 2 focuses most of its time on scaring the viewer and in this, it really succeeds. But then why wouldn't it? By now James Wan has got his direction of horror movies down to a fine art. It is just the parts when the film ventures away from scares and fails to release tension that doesn't allow this instalment of the franchise to stand above the one that proceeded it...