Doctor Who: The Creature From The Pit - Review 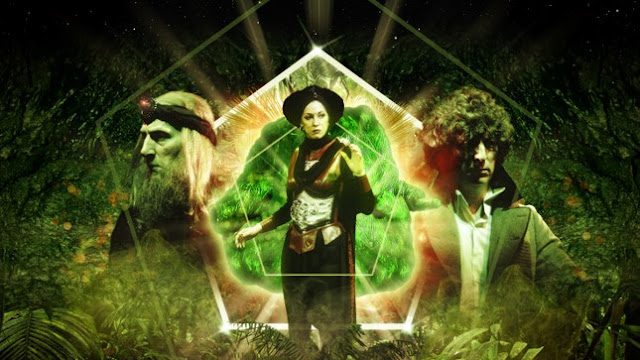 Now, I'm not one of those fans who has a soft spot for the Graham William's era. But I suppose it had its moments despite its many faults and in a way, I suppose I feel sorry for this era. It is overshadowed by both the Phillip Hinchcliffe horror era and the John Nathan Turner era and this is one of those few years which are ridiculed by fans because it isn't what they wanted it to be. Sure, under William's eye, the show wasn't scary and it wasn't serious. But it was fun. It was just pure escapist fun. That's something which a lot of fans seem to forget, they dismiss this part of the show because they think it is a load of rubbish because it was too childish and too silly. 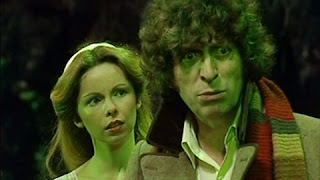 And lets not forget Douglas Adams who was the script editor at this time. He could be very silly but he was very clever. When he could be bothered to put the work in to his scripts, he came up with some wonderful stuff like City of Death. Unfortunately, he was often content to sit back and let things go past him, letting problematic stories like Nightmare of Eden go into production. The Creature From The Pit is a story which falls somewhere between those two. It is nowhere near in the same league as City of Death but it isn't the same train wreck as Nightmare of Eden.

Watching this story, you can see that Adams' fingerprints are all over it. So-much-so, that you have to wonder how much was either written by David Fisher or how much of Fisher's original story was left. The dialogue is just slightly too sharp, the characters slightly too witty. And the plot a knowing parody, although there are moments when you expect Tom Baker to break the fourth wall completely and offer you a jelly baby. 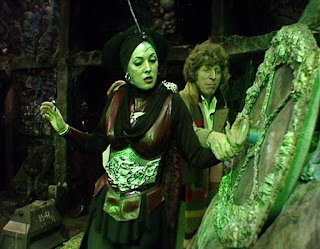 The story was made during a time when the BBC was virtually bankrupt. But this story manages to look sublime. At least in terms of the sets and costumes. The effects and the creature really don't work, but more on those later. The jungle sets on the planet Chloris is a really sumptuous creation and I think, one of the shows' best sets ever created. And even the costumes are above board, with the exception of those worn by the bandits who were just annoying. But more on them later too.

The Creature From The Pit, is also a well-acted tale. By this point in his time on the show, Tom Baker was both a blessing and a curse, luckily though, director Christopher Barry has managed to reign him in and kept him under some form of control. Lalla Ward manages to effortlessly turn snootiness into an art form here as Romana turns her nose up at virtually everyone she meets. Geoffrey Bayldon is nothing short of delightful as the lovably idiotic fortune teller, Organon. And Myra Francis is just fantastic as the villainous Lady Adrasta, who looks like a glamorous universal dominatrix.

But the bad points of this story outweigh the good. The narrative losses any momentum it had enjoyed during the final episode and the metal stealing bandits are nothing more than a bunch of hairy morons. Sadly most of Tom Baker's, Teach Yourself Tibetan, routine falls so flat you can hear it thud on the ground at his feet and David Brierley who replaced John Leeson for series seventeen makes K-9 sound like a really smug git and he lacks the charm that Leeson had given the robotic dog. And lets not forget the titular monster which can be filed away in 'what were they thinking?' How they managed to slip the monster's limb which looked suspiciously like a piece of the male anatomy past Mary Whitehouse is beyond me...