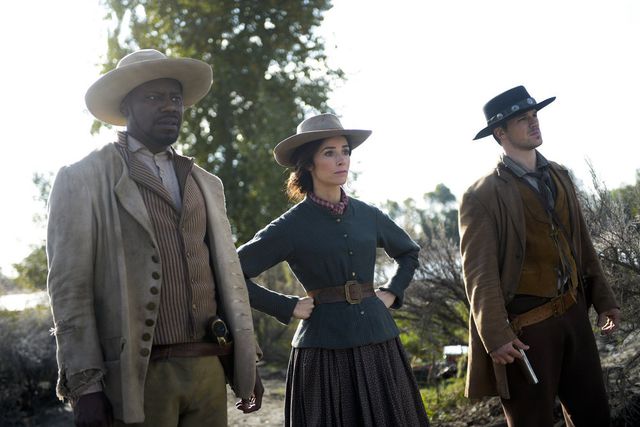 This episode has a very strong theme about courage which runs through it, while we get to explore a little bit more of history, in this case, The Battle of the Alamo.

Wyatt is told that he is being replaced and that this is last mission to try and fulfil his main goal, which is of course, killing Flynn, the man who has evaded them for the previous four episodes. But what every single member of the military personal at Mason Industries seem to forget is that it isn't a good job for him to make any major changes to history in order for him to succeed in his vital mission. And with his mission taking him to the Alamo, things get even more complicated when Flynn has an entire army to hide behind. Of course, things are left up to Wyatt, Lucy and Rufus, who must help, while not ruining the historical records about the Alamo.

But for Wyatt, the Alamo mirrors an experience he had as a solider where he and his men found themselves in a similar standoff. Wyatt gets a couple of great scenes with General James 'Jim' Bowie who led the men, women and children who defended the Alamo while Rufus gets some nice moments with Davy Crockett.

This episode sure was a hell of a lot of fun and was fairly educational for someone who didn't know a lot about this particular point in history, a chapter which is filled with some of history's most colourful people.

Matt Lanter puts in a particularly good performance and shines as Wyatt Logan and he has gets some brilliant support from Chris Browning as General Bowie. And I was also really impressed by Jeff Kober as Davy Crockett.

While we didn't get to see much development in terms of the Rittenhouse conspiracy in this episode, it was a good thing in the end, it would have only interfered with the flow of this particular story. And if Timeless continues to give us excellent historical tales like this, then surely it will more than justify the recent decision to extend the first season episode count. Now all we have to do it hope it gets enough decent ratings to win a second season...