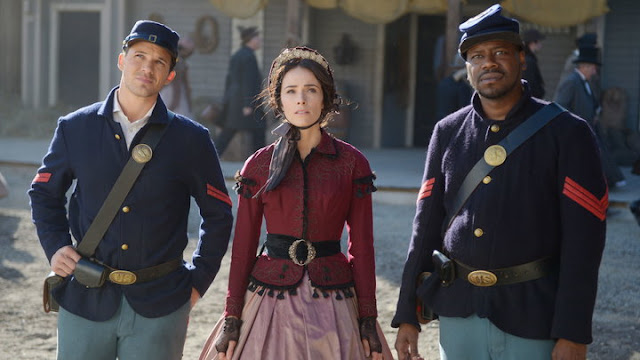 Picking up directly from the pilot episode, Lucy is still grieving the loss of her sister, who has seemingly never been born due to her father never meeting her mother. This means that the man who she thought was her father, isn't. Ah, don't you just love time-travel?!

Anyway, the team get sent to prevent Flynn from interfering with the assassination of Abraham Lincoln. Flynn has his sights set on murdering Lincoln's vice president to, as he justifies it, save all of America. During the course of the proceedings, Flynn runs into Lucy once again and he warns her away. Claiming to be preventing a conspiracy which could destroy America and we learn that there is truth to Flynn's words. In the present day, head of the time-travel program, Connor Mason, is involved in something dark and is forcing Rufus to spy on the team who are quickly becoming more than teammates, but his friends.

Lucy takes it upon herself to pose as Juliet Shakes and befriends Lincoln's son. During the course of their friendship, she quickly becomes torn on whether or not they should save his father or let history play out. In the end she decides to intervene but only ends up saving the life of the vice president and not Lincoln, who is assassinated before she can do anything about it.

Rufus get to meet some heroic black soldiers who fought in the Civil War and eventually gets to prove himself a hero when he saves the life of someone else who Flynn had planned on killing. Rufus has the potential to be the most interesting character given that he is now in a predicament of having to work with his friends whilst also spying on them. I just hope the producers seize this plotline and run with it.

Actor, Kelly Black puts in a pretty good performance as John Wilkes Booth, the man who was supposed to kill Lincoln but in this version of history, ends up not doing so. I'm not too sure how that is supposed to change history but given that Lucy's family was effected by her participation in the history surrounding the Hindenburg, so it wouldn't surprise me if one of the other main characters found their lives changed when they return to the present.

This episode was a really good outing, building nicely on what was established in the pilot. The writing was top-notch, but then what do we expect from the man who brought us Supernatural, a show now in its 12th season!
Abigail Spencer Historical History Malcolm Barrett Matt Lanter NBC Review Science Fiction Television Timeless