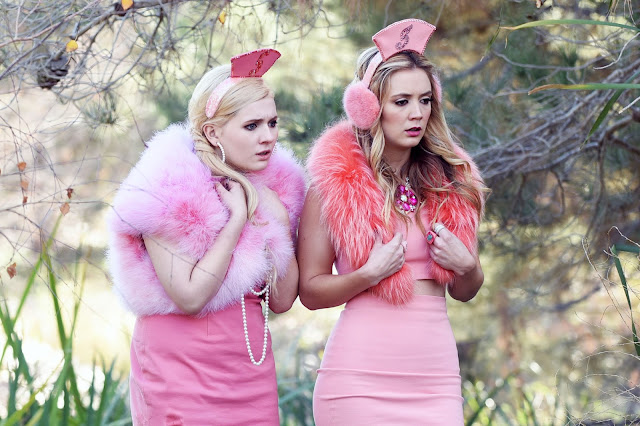 Scream Queens concludes its second season with an appropriately titled episode, given that draining the swamp was what I had been screaming at the screen for them to do all along. After one of the Green Meanies was killed off, being pushed into a bath of boiling oil will do that to you, it leaves Ingrid Hoffle and Doctor Cassidy Cascade, whose mum is more insane than he is - keeping Zayday hostage, begin to systematically kill everyone in the hospital. But the spanner in the works comes from Chanel #3, who Cascade won't kill and promises to run away with. Munsch finally admits she is dying of an incurable disease and Chanel ends up in the line-up for a major gig, replacing the murdered host for the TV show, Lovin' The D.

As usual, it is Chanel #3, who steals the show after Cascade fails to go through with the act of killing her. Hester lays out her evil plans to Holt. She wants him to marry Munsch and when she dies, he will inherit her trust and they can use it to buy a remote island and set up an extreme tourism venture where they get to kill off the tourists. I don't know what it is about acting like a murderer, but it is a good light on actress, Lea Michele! Chanel manages to get a hold of Holt's phone and discovers that he has brought an engagement ring but he doesn't propose to her, he proposes to Munsch instead.

Cascade manages to summon up the courage to tell his mum that he is done with killing and then confesses to #3 about Hoffel. Billie Lourd is so subtle and deadpan that when she doesn't touch her earmuffs, it is startling. With Holt and Munsch married, #5 turns out to be something of a medical genius, and she figures out that Munsch may not be dying after-all. She tells Holt to perform a complicated brain surgery on his wife. And finally Hoffel is working on her own plan, using the toxic waste from the swamp, she is going to create a bomb big enough to take the building and everyone inside, down.

Her plans nearly come to fruition, she manages to trap everyone in a cage in the basement where she shoots Cassidy's mother, after she and Zayday return. So Zayday is back! And it is hilarious to see that no one seemed bothered about where she had been for the past few episodes! Suddenly Denise Hemphill stumbles in and defuses the bomb. The gang give chase and Hoffel heads to the swamp and throws a machete at the group which would have killed #3 if Cascade hadn't pushed her out of the way. He dies and Hoffel ends up trapped in the quicksand where the group agree to let her sink. So there you go, no more Green Meanie. In the end, everyone sort of gets what they want. Hester steals Munsch's money and she and Holt go of to the island to kill tourists. Zayday and #5 run the hospital and Chanel becomes the face of a TV programme with #3 as her EP. Everything ends perfectly, sort of, for everyone, until Chanel gets into her car to find an old friend - or foe - is waiting...

The second season of Scream Queens felt like all good horror movie sequels. It was good enough for what it is but doesn't stand up next to the original. I have no doubt in my mind that Emma Roberts could play Chanel in her sleep but this season didn't give her anything new to do. The highlights for this season came from John Stamos and Billie Lourd, who is undoubtedly my favourite actress and character on this show. Even Taylor Launter was surprisingly funny. And so what if Scream Queens isn't a show that will win awards, it is consistently funny and provides good scares and gory enough effects for many a horror fan. But it is also popular enough to draw in some great cameos and guest stars and I really hope this show gets a third season.