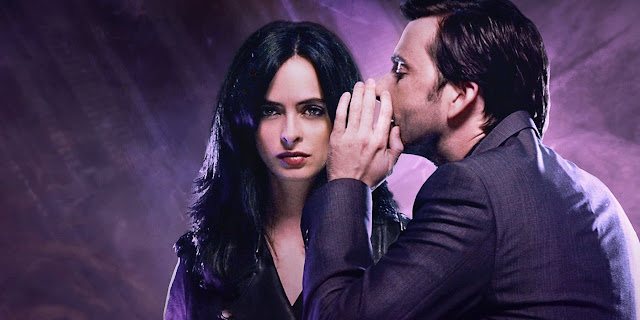 Jessica Jones rules! Who knew? Well I did, I tend to like the comics that she features in. But for those who have never heard of her, she rules, okay! Superhero television seems to be going from strength to strength, whether it is the fun and light The Flash or the gritty Daredevil, they all tend to be a lot of fun. And amongst all this, Jessica Jones manages to bring something completely different to the table, there is a different mood and style about it, something which other shows of its ilk will probably begin to take note of.

This series is based on the brilliant comic book series, Alias, originally created by Brian Michael Bendis and Michael Gaydos. Jessica Jones focuses on the more seedy side of the Marvel Universe, with our title character making a living by being a private investigator. Of course, all she really does is take photos of cheating spouses. The series leans more to a huge noir influence as Jessica is a hard drinking, wise-cracking PI with a shady past.

Actress Krysten Ritter has always been a quirky and interesting addition to any of the shows she has been part of in the past, but here she was perfect at being a quick-witted, sardonic character. She easily gives her best performance to date here, as she nails Jessica's rougher edges. She is someone with a 'don't mess with me' attitude, but has been driven to even more extreme measures and anti-social places because of horrible experiences from her past. And yet, she is also someone who can't help herself but give aid to others, and she has a couple of superpowers that she can use to help. But she only uses them when she deems it appropriate.

Daredevil was the first Marvel live action adventure to give us a really compelling villain in the form of Vincent D'Onofrio's, Wilson Fisk - AKA Kingpin, but there has been no one in the Marvel television and movie universe, like David Tennant's Kilgrave. While the idea of mind control is nothing new, the series isn't afraid to go some very dark and unsettling places with the concept to make it really interesting again.

But the series really asks you to consider what someone with the ability to tell you to do whatever, would be like. And what would happen if someone like this was a sociopath with no morals or code. The reason Kilgrave is so scary is because he only cares about himself. He doesn't have the same aspirations as Kingpin at being the boss of a criminal empire, and he doesn't want to be a robot like Ultron, he just makes people do whatever he wants because that is what is on his mind in that moment. He doesn't care about other people, their thoughts and feelings. He doesn't care who he hurts. There is one moment where he moans about bad it must be for people who don't have others to do their bidding, allowing us to see how skewed his view of the world is. And Tennant is brilliant, using his instant likability and humour to disarm you for a few moments before doing something awful which reminds you why you are supposed to hate him.

Pleasingly, the supporting cast is brilliant too and were well used in how they interacted with Jessica and the overall plot. Carrie-Ann Moss proves she has what it takes to be a slightly twisted lawyer as Jeri Hogarth, who treats her job and probably life as a game which only she can play. I really liked Eka Darville as Jessica's drug addicted neighbour, Malcolm. Wil Traval, put in an interesting performance as Simpson, a cop who instantly puts your back up, he pitches his performance in such a way that from the moment he is introduced, you know there is something off about him. And Mike Colter more than proves he was ready for his own solo series as Luke Cage. And it really helped that he and Ritter had a cool and sometimes sexy chemistry.

The standout character from the supporting cast was Patsy Walker, played by Racheal Taylor. Patsy Walker is the hero Hellcat in the comics. I hope we see her suiting up either in the next series of Jessica Jones and the upcoming Defenders. Both Taylor and Ritter do a fantastic job at showing the unlikely bond between their two characters. And I was also pretty impressed with Erin Moriarty as Hope, a young woman that Jessica was hired to find after she had gone missing. Hope took the series to some quite dark and twisted places and Erin Moriarty really nailed the characters traumatisation after Kilgrave compelled her to kill her parents.

But now I am going to complain about a few aspects of the show which didn't work, the first of which concerns the character of Robyn, played by Colby Minifie. She is another of Jessica's neighbours and is first introduced as part of a bizarre brother/sister duo, alongside Rueben, played by Kieran Mulcare. From the first moment she is introduced, Robyn feels too heightened and farcical, feeling like she isn't really a part of that world at all. Minifie feels like she was doing exactly what she was asked to do but her character was a major misfire who grinds any scene she is in to a jarring halt. It doesn't matter too much in the beginning, but when she begins to play more of a part in the second half of the season where she begins to play a more crucial part in the plot. There is one scene later in the series which is the worst as she comes along to a group of people, forcing them to listen to her awful suggestions as if she too has powers like Kilgrave.

And there are a few too many scenes which get devoted to Jeri's marital problems. This does a huge and impactful payoff later on which does tie back into the overall plot, we would have gotten the idea with a lot less screen time to set what was happening. And much like Daredevil, Jessica Jones feels like it hits it peak a little too early, with the ninth episode, The Sin Bin, being one of several great instalments. Of course, the ending of the season is great too, with one extended appearance of a guest character, but it feels like the best moments of this season came early on.

While the issues of this series are clearly present, Jessica Jones really does feel like a triumph. It really does feel the most R rated thing we've had coming out of the Marvel Universe with its overt violence and its frank depiction of sexuality. Sometimes the sex aspects could feel a little bit too much, not really contributing much to the plot. but it mostly depicted the rather realistic world that our characters live in.

Most notably, the showrunner, Melisa Rosenberg doesn't shy away from dealing with the fact that Kilgrave is a rapist, both mentally and physically, and it tackles, head on, the consequences of what he makes people do to themselves and each other. It is the element of the show which is handled the best, taking the idea of a supervillain to its scariest, most evasive place, while it makes sure not to lose focus on or devaluing the people who have been victimised by him. The show constantly shows us how those people try, or in some cases, don't try, to move on from what he had done to them.

Most of the content in this series is quite risky for something coming from Marvel. But Rosenberg and the others who contributed to the show make sure that they don't back away from the hard subject matters, and give these characters their due as each one has to process what has happened to them and decide what they should do next.

And what helps immensely is that Jessica, despite the walls she has built up, doesn't lose her sympathy for those who have also been affected by Kilgrave.

Jessica Jones is often grim and there is a lot of creepiness to it, especially when Kilgrave appears. For some viewers, this series might be a little too strong for them, but I commend Marvel for being willing to go to such places with this series and it is a strong, compelling series throughout. We get a strong leading character who guides us through the darker corners of the Marvel Universe and a villain who manages to be both compelling and repugnant at the same time. Coming close off the heels of Daredevil, Marvel managed to really outdo themselves with Jessica Jones, who manage to quickly prove why she was so deserving of her own solo series, even though many of the viewers had never heard of her before...