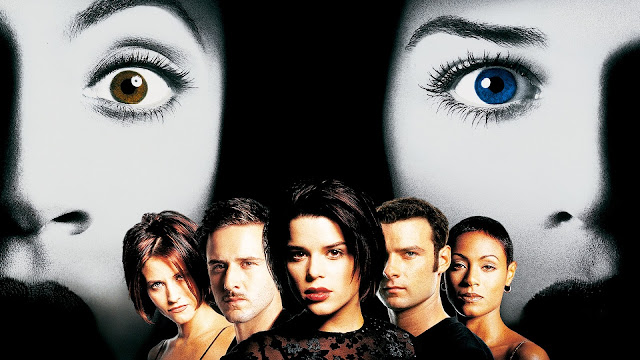 Just the previous year, Scream seemed to be revolutionary. The characters featured in it had seen the horror movies, knew and understood the clichés and tried not to make the same, obvious mistakes that people in horror movies often did. A year after the first film, the sequel arrived, once again reuniting the surviving characters from the first one and sticking them in another slasher movie and seeing who would survive.

The movie once again relies on the jump scare machine, with the scares coming from a new crazed killer in the iconic ghost costume stalking college freshmen's and the surviving members of the original movie. While there have been a few jump scare moments in other films, Insidious and The Conjuring to mention a couple of new ones, the scares here just didn't work for me and I found a lot of the violence to be inappropriate. Being a sequel, the movie is a lot gorier than the original and that sadly distracts from the brilliant screenplay from Kevin Williamson.

His premise is brilliant, the killer is influenced by those original horror movies and goes out killing people, claiming that the movies did it. Unfortunately something similar happened in real life not so long ago and because this sort of thing still happens, the movie is still quite relevant today.

The movie opens at the premier of a new film called Stab, based on the events we saw in the original movie. It doesn't take long for the onscreen couple of Jada Pinkett Smith and Omar Epps to bite the dust and from there, the film sees the killer begin to stalk a college campus where survivor's Sidney, played by Neve Campbell and Deputy Riley, played by David Arquette has found a job as a security guard. Also making her presence known thanks to the first murder on campus is Gale Withers, played once more by Courtney Cox. She has become very famous between movies thanks to her book, which details the events of the first movie and influenced the new film, Stab. And also stalking the campus is Cotton, played by Liev Schreiber. Cotton had been accused of Sidney's mother's murder but had been found innocent after the really killers had been unmasked in the first movie.

But who gets killed and why is where I have a complaint. The killer is someone who the audience have no time to guess it is them, meaning the character has very little screen time. And everyone who seems suspicious is evidently innocent. It is a little unclear and the explanation at the end seems to be a little muddled, like the killer didn't know why he was doing the things he was doing!

It is a shame that I haven't seen any more work from Williamson in mainstream media, he may have done, but I haven't seen anything. But one thing is apparent, Wes Craven appears to have born to direct material like this. Having already given us The Hills Have Eyes and The Nightmare on Elm Street, he really sinks his material and delivers an interesting sequel that helps to make up the original trilogy.

But do films influence their audience into committing acts of violence and murder? That is certainly what Scream 2 seems to think, or is it just an ironic statement, made to make the movie scarier? Would a film like this work in educating audiences in the conventions and rather silly clichés often seen in horror movies? Or could it influence the audience like we see in the characters here? Now that is an interesting idea, cue Scream 5...