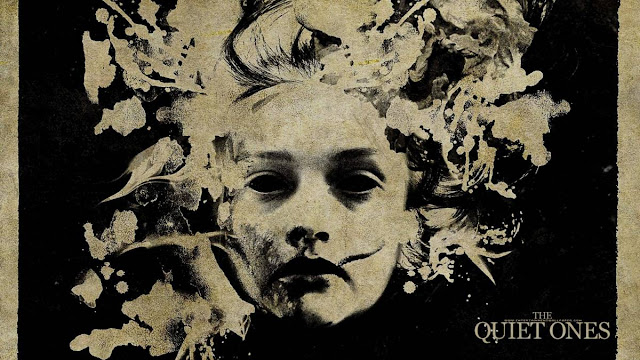 It is pretty ironic that with a title like The Quiet Ones, that you have to have the volume cranked almost all the way up to get any of the scares. This one hell of a loud movie! But it isn't ghosts and demons making the noise. It is cork's shooting out of bottles like bullets, radios go off like jet engines and clapper boards sound like falling trees. My only explanation for this is that the filmmakers hoped these noises would stop the audience from falling asleep. If that was the reason then they can consider it mission completed but this film won't keep you awake from nightmares, it is the tinnitus that does...

Taking place in 1974, this movie boasts that it is based on actual events. What probably happened though was that there was one group of people who sat around a table and talked about ghosts. Jared Harris stars as an Oxford professor who is convinced that so called poltergeist activity is actually caused by telekinetic manifestations induced by traumatic events. One problem I have with this is how this can be considered a more rational and plausible cause for ghosts than an actual spectre is beyond me! Joining him is the so-called college hunk, played by Rory Fleck-Byrne, his girlfriend, played by Erin Richards who clings to the character's cigarette lighter as if her heart depended on it.

And then there is a shy cameraman, played by Sam Clalfin, demonstrating he does have the range of a great actor after having played the cocksure Finnick in The Hunger Games: Catching Fire. The object of the professor's experiment is a disturbed young orphan, played by Olivia Cooke, who has many conversations with an imaginary friend, which then leads to fires being started, chandeliers shaking and your other average poltergeist activity. But the university decides to cut the funding to the experiment and the gang have to retreat to a country house to continue their studies. How did none of them think that it would be dodgy? And they spend the movie provoking ghosts and then shouting that they don't really exist when things start to happen!

Before this movie was released, The Conjuring had proven that ghost stories often look fantastic in the seventies. And on that front, The Quiet Ones is no exception. But no matter how much retro stuff they use to fill the screen, one can't look past all the familiar paranormal parlour tricks, the film employs. It is apparent that the only reason they have someone around to film this is to get some grainy, seventies, found footage elements included. The only interesting thing about this film is the question of scientific culpability with Harris's professor growing increasingly lacks concern for the safety of the subject and those around him, this is aided by Cooke's performance who makes a character a little more well rounded than the others. But nothing really comes to this question except for a lot of shouting matches and characters unnecessarily repeating the ethics of what they are doing.

And the only thing that is scary about this movie is that it comes from Hammer, a reputable company, England's most famous horror production companion stretching back all the way to the 1950s. When they can create something as good as The Woman in Black was, this movie really fails on the scary front. In fact, one might be mistaken for thinking this was another bad Hollywood horror movie. But only the accents betray this. But you may have trouble hearing those over the cacophony of noise that plagues this movie...