Doctor Who: The Shadow of Weng-Chiang - Review 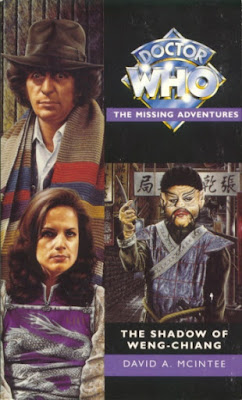 While they could be good, The Missing Adventures had an unfortunate habit of drawing on every last bit of the television series, rather than creating something truly original. It was of course inevitable that there would be a follow-up to the universally adored, The Talons of Weng-Chiang. But the title of the book is incredibly deceptive as it promises the return of the deadly Magnus Greel. Which doesn't happen. Of course, this is a good thing, all things considered, as this allows for development in plenty of other characters, rather than just allowing returning villains to shout the same lines as they had done in the television adventure.

The villain of this book is the strangely preserved, Hsien-Ko, who has her own personal reasons for wanting Greel to return. She plans to create a diversion in time which will result in Greel arriving in the 1930s before he first arrived in Victorian Shanghai. What is interesting is that Hsien-Ko isn't your typical villain. She isn't villainous for the sake of being bad, she is just very misguided. We get to see the majority of this story from her point of view, and her real longing to settle down and have a normal life with her lover and second-in-command, Kwok. But her ruthlessness and ability to travel from place-to-place make her a real threat to those around her.

This book features the Fourth Doctor, Romana 1 and K-9, with the story taking place between The Stones of Blood and The Androids of Tara. The problem with their inclusion in the story is the weak reason we are given which makes both the TARDIS and tracer believe that a segment of The Key To Time is going to be found in 1930s Shanghai. Much of the 'science' behind this book doesn't make a lick of sense so it is a good job that the setting and atmosphere of 1930s Shanghai, a corrupt police force, gangs, Tongs, and the battles between the Chinese and Japanese, give the crew some other things to really worry about.

The thing this novel really borrows from the original series is Mr. Sin, who also first appeared in Talons. Sin gets to return to his original life in this novel, which was an assassin. It is believable that he could use ventilation shafts to reach his targets, unlike anyone else in Doctor Who. He also gets the opportunity to indulge himself in his favourite activity a little bit more than he did on television, killing. After the limited on screen kills that Sin manages on television, in this novel he literally gets to slice-and-dice, dozens of people, mainly towards the end of the book. This is allowed to happen because his master, once again, underestimates his bloodlust and loses control of him. It is perhaps Sin, who is the real villain in this book. Take his bloodlust and couple that with the fact he has the ability to travel wherever he wants and he is a real, credible threat, perhaps the only one in this novel.

But what about the actual story? It is a page-turner, even if it is just a regulation run-around. I quite like the Mary Tamm incarnation of Romana, but she doesn't get to much to do here, like the author couldn't write for two Time-Lords. The Doctor is his usual aloof, Fourth Doctor persona, with the supporting cast being generally well-written. It was nice to see that the plan concocted by Hsien-Ko was different and original, if a bit worrying in its scale. And I wouldn't assume that any of the characters are who they first appear with this book either! So The Shadow of Weng-Chiang isn't a patch on the original, it does stand in its shadow, but it is a good read. And unfortunately, those were few are far between with The Missing Adventures...