Doctor Who: Heroes of Sontar - Review 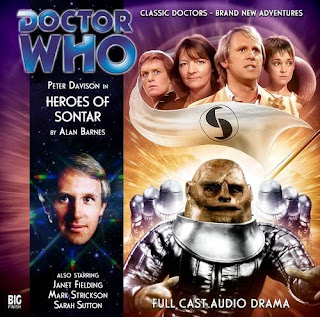 Heroes of Sontar is certainly one of those stories which divides the fans, some people love it and some people don't. This was the first appearance of the Sontarans in an audio format and while listening to this story it is important to remember that creator, Robert Holmes had always intended for the creatures to be treated with a certain sense of disbelief when it came to the clone race. The humour that they have when it comes to their militaristic habits has been done to death in the modern series with the character of Strax, the classic series showed them in a completely different light, in their first two stories they were actually quite scary, especially with the experiments they performed on humans in The Sontaran Experiment. Heroes of Sontar won't appeal to those who want a hard-hitting story which showcases the Sontarans at their militaristic best, it does manage to keep in line with how the clones had been portrayed from the very beginning, something which fans seem to overlook when it comes to this release.

Wanting to give Tegan a break after the events of The Cradle of the Snake, The Doctor brings the TARDIS and it's occupants, Tegan, Nyssa and Turlough to the planet, Samur. However, unknown to the Doctor, the Sontarans had invaded the planet twenty-five years prior and the world is no longer peaceful. They bump into a bumbling, 'Dad's Army-esque", group of Sontarans made up of Field Major Thurr, Corporal Klun, Sergeant Mezz and troopers, Venn, Nold and Jorr. They have been taken from different clone batches and sent to the planet under strange orders. And after claiming the world as their own, they soon come to realise that there is something far more sinister keeping them from advancing further onto the planet.

The script from Alan Barnes, has a lot of fun when it comes to interaction between the Sontarans, and how silly they can actually be. And through the interactions between the Sontarans and the TARDIS crew, there are actually a lot of clever ideas on display. There is a deadly symbiotic creature threatening the planet, which gives the story much of its tension and by giving each Sontaran their own backstory, the script is instantly fleshed out, making each one feel more relatable in some way or another. Over the course of the story, the true nature of Samur reveals itself, with Nyssa and Turlough being forced to team up with a couple of Sontarans in the opening episodes, The Doctor heads into space on a mission to discover why the group of Sontarans had actually been sent to the planet. The truth behind their mission is quite sad and one can't help but feel sorry for the Sontarans when the truth is discovered. However, the explanation of the Witchguard's infection of the Sontaran gene-pool isn't an idea which lends itself well to audio, it does give a perfectly logical explanation for everything which had come before it.

As expected the interaction between Tegan and the Sontarans is brilliant and actress, Janet Fielding seems to be having a brilliant time in this story. Turlough and Venn are brilliant with each other, both are as cowardly as each other, deep down, but they try to do the right thing. And Nyssa reveals to Tegan the truth about herself. This is a Nyssa after she left in Terminus, she has had a whole life since then and she tells Tegan about her children, a plot point which would have enormous ramifications in the future.

So, Heroes of Sontar is a divisive story from the masters of audio at Big Finish, with the vast majority of the story being played for laughs, some of which are more effective than others. But, this story isn't afraid to poke fun at the iconic foes, which will of course turn fans of the Sontarans away. If you are willing to listen right up until the end, there is some genuine emotion at the heart of the play which gives everything else a bit more meaning...